The 1st Dutch Carabiniers were commanded by Lt Col Coenegracht and were in the Dutch Heavy Cavalry Brigade commanded by General Trip van Zoudtlandt.   The majority of sources show the 1st and 3rd Dutch Regiments in bicornes and their counterparts in the 2nd Belgian Regiment in Grecian helmets.  A Belgian of the 2nd Regiment is shown below with a pioneer and a gunner. 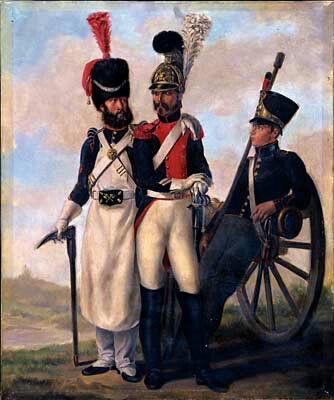 The retention of bicornes seems curiously retro and out of sorts with every other regiment (of any army) at Waterloo.  Given that the uniform, less facings, is the same for all three regiments and based on the French Bardin style, the bicornes seem even more incongruous - one would have expected all three regiments to be in the same headdress.  And yet it's hard to ignore the few sources that show bicornes (and there aren't many).