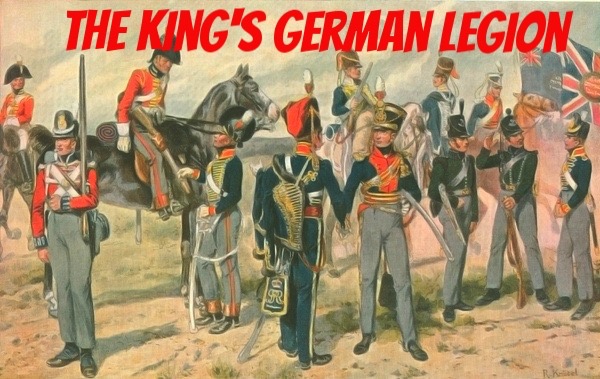 The King's German Legion was as well regarded as any of the veteran British Battalions in Wellington's Army but, unlike the conventional British regimental system, the KGL was a miniature army in its own right, with Infantry, Cavalry and Artillery. 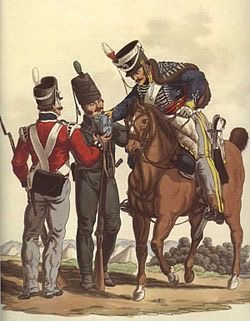 At Waterloo, most of attention is focussed on Ompteda's Brigade which contained the two light battalions that defended La Haye Sainte and the 5th and 8th battalions which suffered so egregiously at the hands of the Prince of Orange - his tactical decisions led to their demise.

I've already completed the two Light battalions and the Light Company of the 5th Battalion (all at La Haye Sainte) and I plan to show the 5th Battalion (reinforced by elements of the 8th) as it set off on its doomed mission in a future post.

This post focuses on the other KGL brigade at Waterloo under Colonel Du Plat.  Sadly, I can't find a portrait of Du Plat (who died of his wounds after the battle), but there is a portrait of Captain Augustus Hartman of the 2nd Battalion. 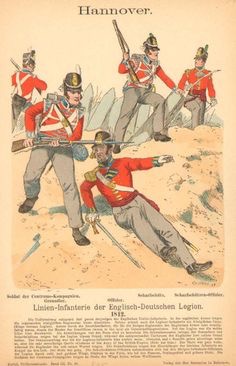 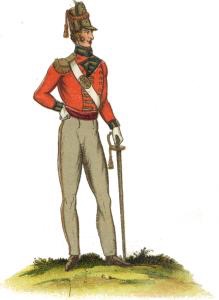 So here is my square: it's composed largely of vintage figures - Hinton Hunt, Alberken, Kriegspieler, Douglas and a few Rose.  The front rank is a little different because none of the vintage manufacturers made kneeling figures; all of this front rank (100 figures) are conversions from many sources, many ACW and various Esci Napoleonic - each with a new head and Trotter knapsacks added - the KGL painted their Trotter packs blue. 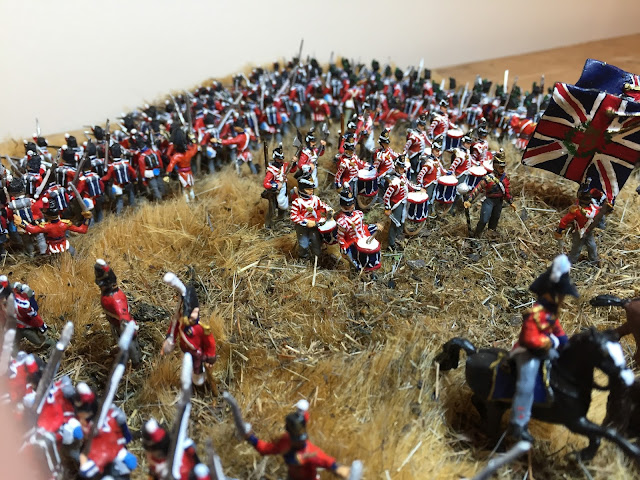 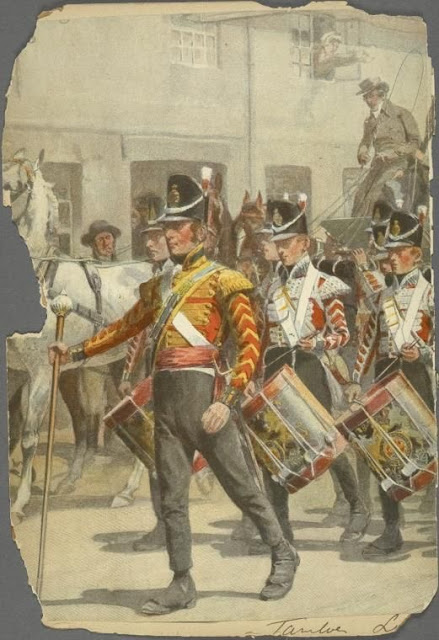 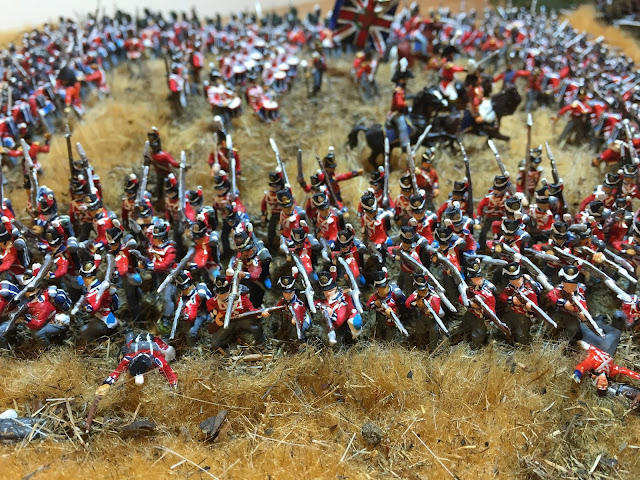 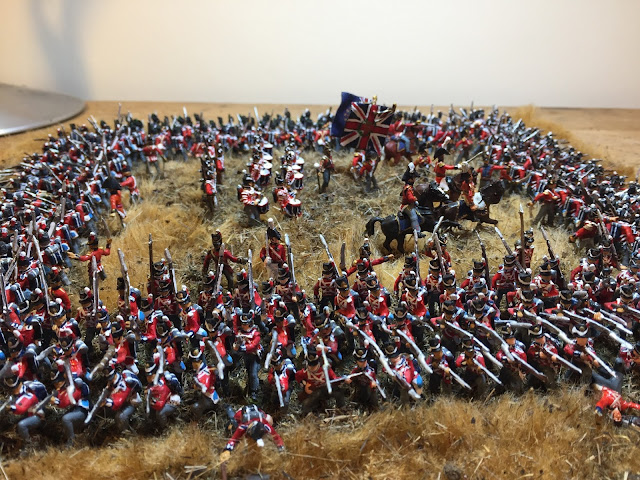 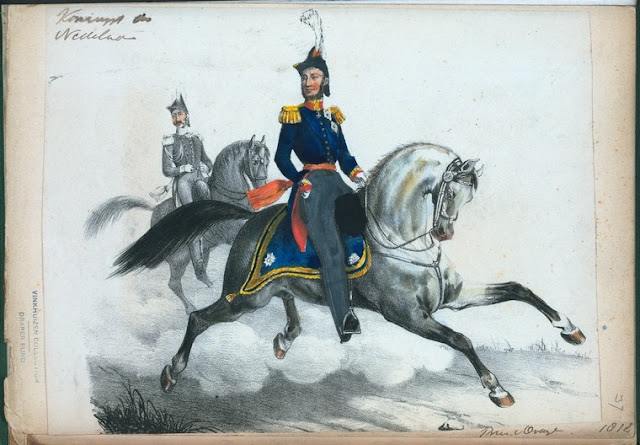 It has become received wisdom that the non-British parts of the Allied Army have had a poor hearing from British historians of the battle, and none more so than the Dutch-Belgian militia.


Given the events surrounding D'Erlon's attack, most of the attention has focussed on Bijlandt's brigade.  My personal instincts are that the revisionist historians over-state their case: in reality, Bijlandt did withdraw, but there were good reasons why this happened.  The Dutch-Belgian militia were less experienced than veteran British and KGL battalions, but then so were some British, Hanoverian, Nassau and Brunswick units which were equally raw. 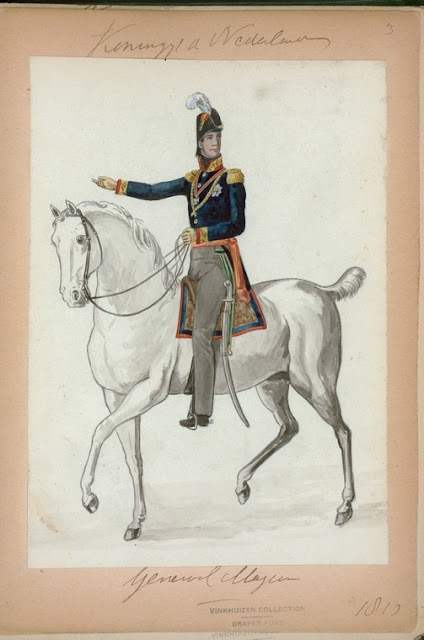 There are various reasons given for this: Bijlandt's brigade was roughly handled at Quatre Bras (but then so was Picton's division); the Brigade was on the forward slope, exposed to the French artillery and unsupported by flanking brigades (although its right was covered by the sandpit).

There is less controversy about General Chassés 3rd Division, which was relatively unaffected by the battle until brought into the right-centre towards the end of the cavalry attacks, where it conducted itself with distinction.
I've chosen to represent the 4th Militia Battalion in General Detmers's Brigade.

The uniform of the National Militia battalions was officially all the same, but unofficial differences may have arisen.  The basic uniform is shown below. 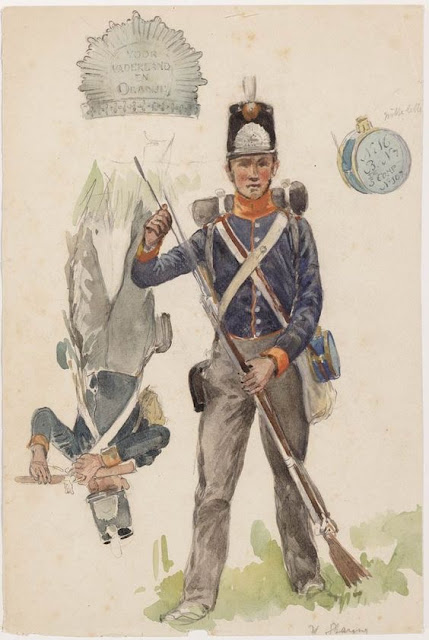 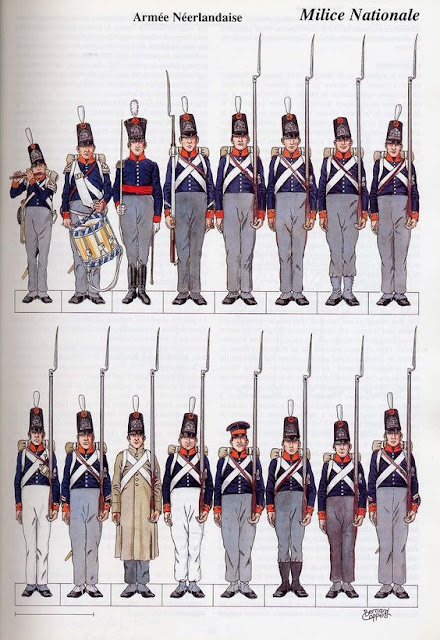 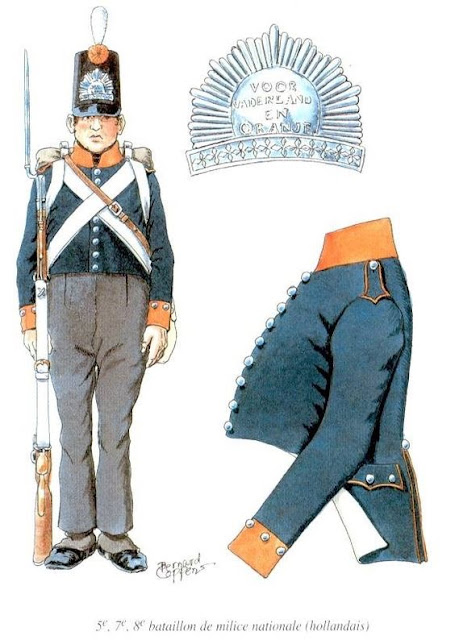 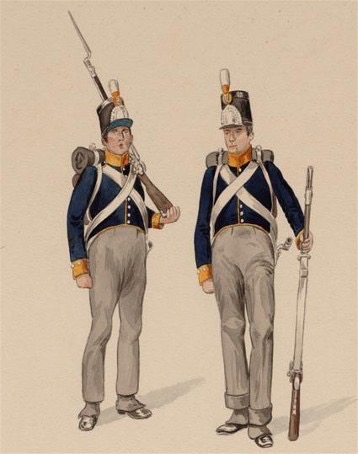 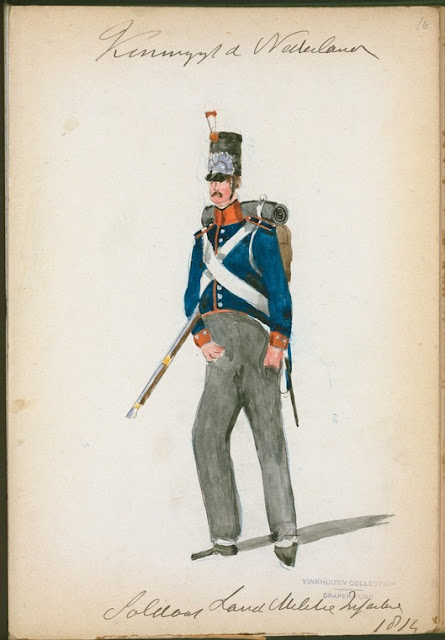 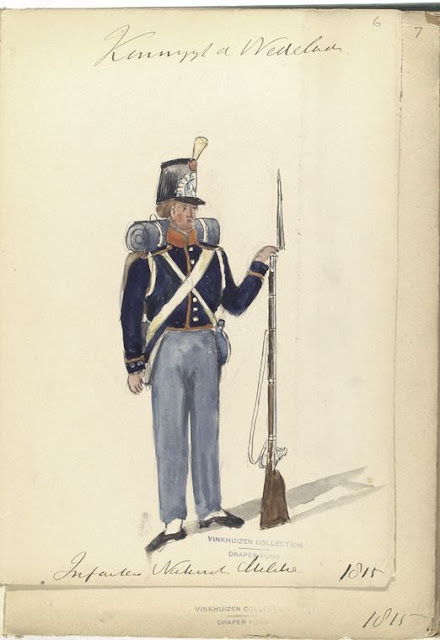 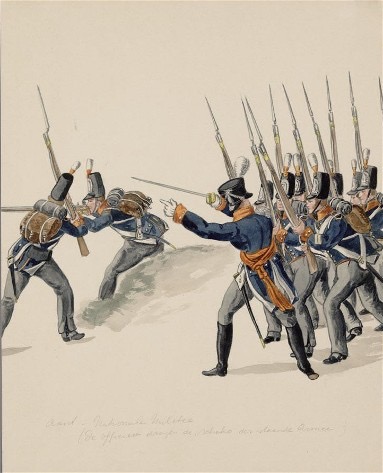 A frequent assumption made about the Dutch Army at Waterloo was that it lacked experience.  A good study of the 8th Militia Battalion  shows a more variegated picture and can be found at Erwin van Muilwijk's website.

His research shows the following:  286 men in the battalion were 20 years old or younger; 388 men were between the ages of 21 and 30; while 163 men were between the ages of 31 and 40. There were 40 men between 41 - 50 years and one many was over 50! The average age was 25 years and 8 eight months. Around 60% of the men were volunteers.  When the unit was raised in March 1814, there were 9 officers who were very old and had been recalled from retirement. They helped to raise the unit, but all were retired again within six months.  The battalion strength was 855 in June 1814. Between March 1814 and June 1815 there were 49 deserters and 161 man left the unit for various reasons. Most of them went to overseas army units and some to the Navy.  39% were experienced men, some with long histories in the military service.

Given all this, here is my square, formed to receive French cavalry.  There are about 400 figures in total. 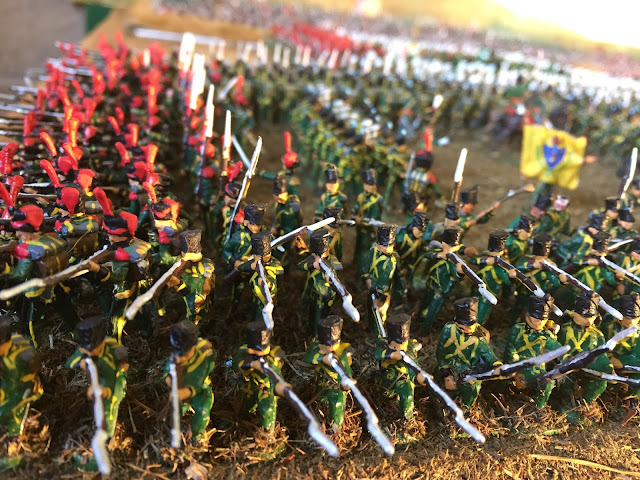 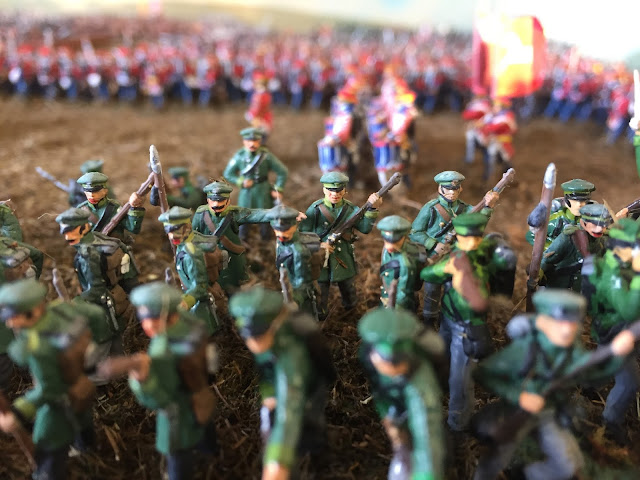 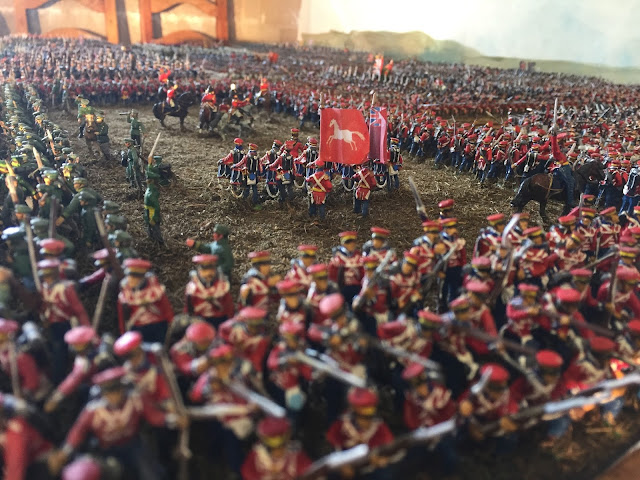 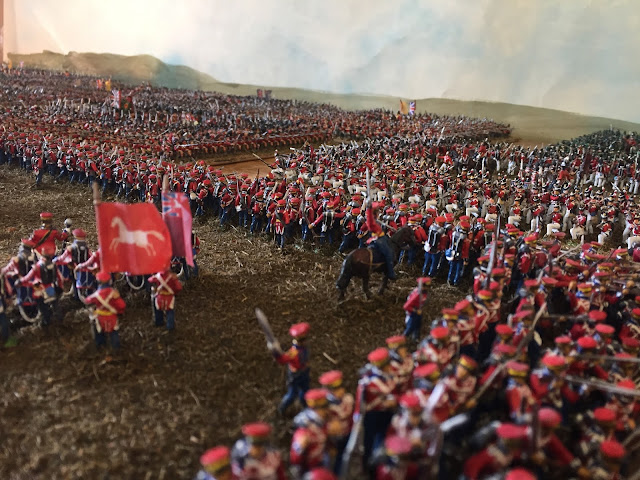 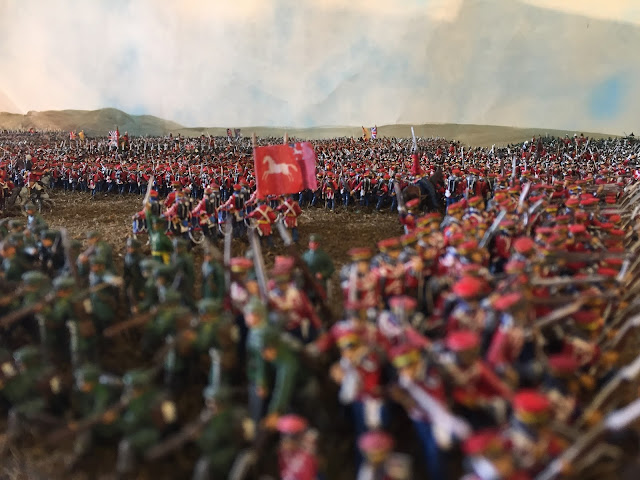 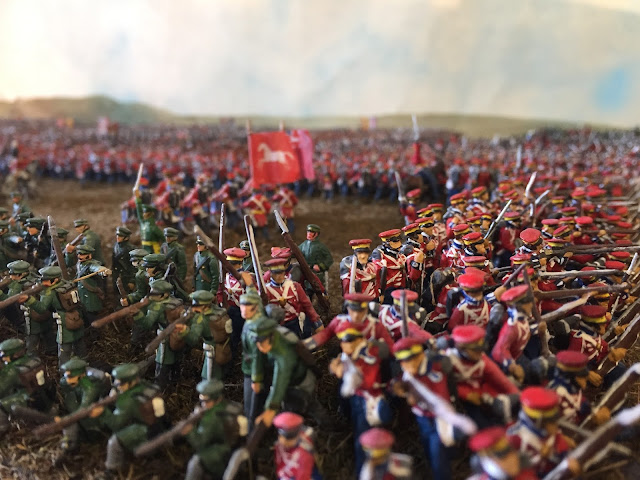 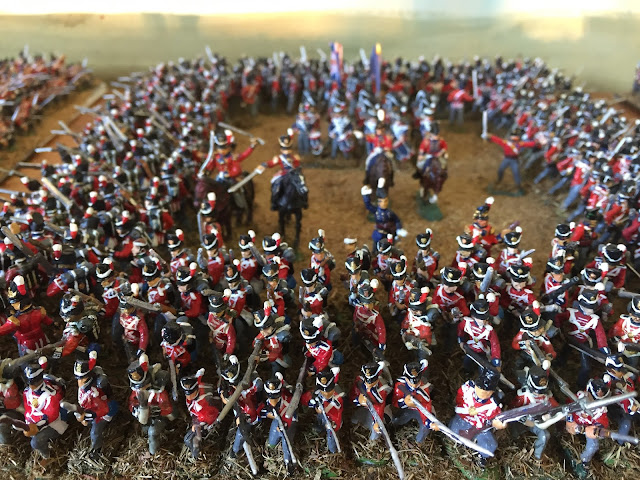 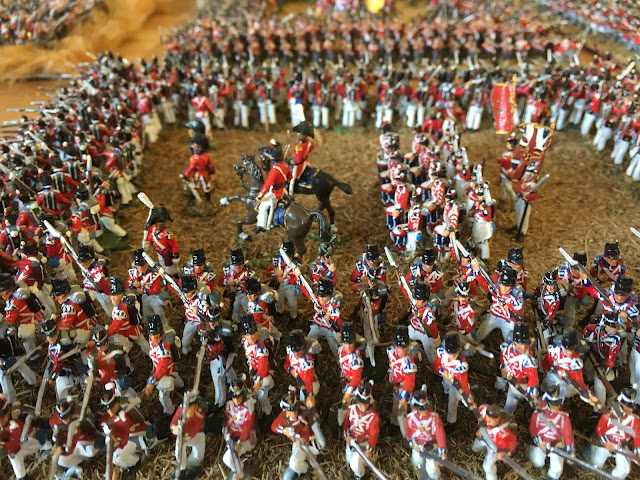 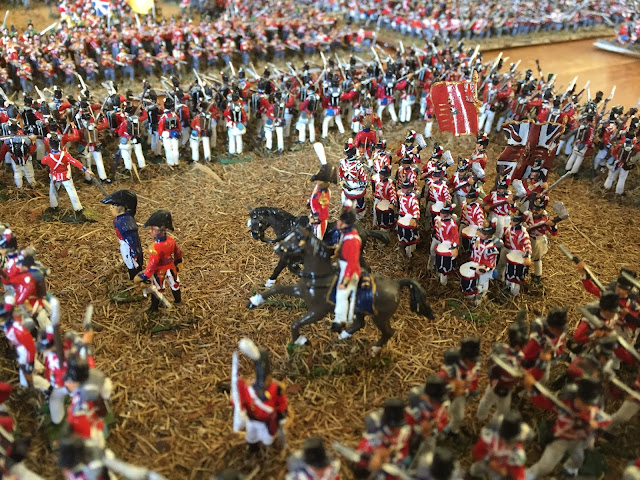 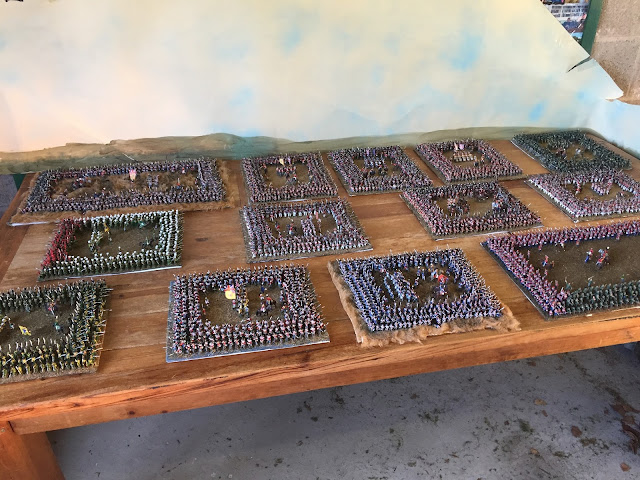