This post on the building known as Trimiotou (but spelt in various ways) has been particularly interesting to research largely because it has virtually no information directly available.  I would particularly like to thank 'Deadhead' and Tango 01 (Armand) from The Miniatures Page (TMP) in helping me with my research.  I gave an earlier preview of the building on 'Reinforcements' but with new information provided by them, amendments have been made to the main building at the southern end and a barn added at the north end.

Just to the south of La Belle Alliance and on the other side of the road there now sits a building called La Saline Restaurant.

No such building gets a mention in contemporary sources of the battle.  And yet a review of contemporary maps indicates that something called Trimiotou or Trimotion was at the same place.


So what did the building look like at the time of Waterloo?  One of the problems with Siborne is that he simplified his models - for instance, the lean-to bakery on the side of La Belle Alliance is clearly missing.

Given all this evidence I conclude that:


So given all that, here is the building with its barn:


I'm presently working on two battalions of the Guard who will be marching up the road past Trimiotou towards Wellington's position.  It remains something of a mystery to me where Baron Larrey's Casualty Clearing Station was, but this seems a likely spot - if any one knows I'd be grateful.

Hot on the heels of my La Belle Alliance post, I've been working on two further battalions, plus the building just to the south of the inn - Trimiotou which is, in turn, just north of Decoster's house.  One battalion is of Grenadiers, the other of Chasseurs.

This is very much 'in progress' and shows my way of working.  The figures are a mixture of Hat, Schilling and Rose, with a few others.  They are at various stages of completion so still look quite scruffy.  Their common feature is that they will all be in campaign order, summer dress.

They are presently advancing in battalion column of companies, but will be in column of route on the model, when built. 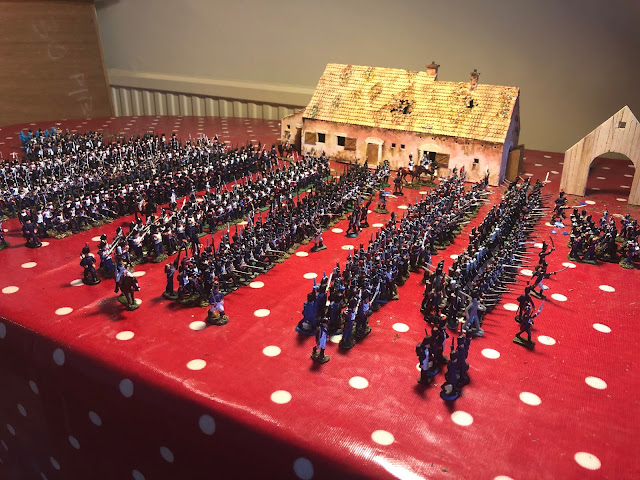 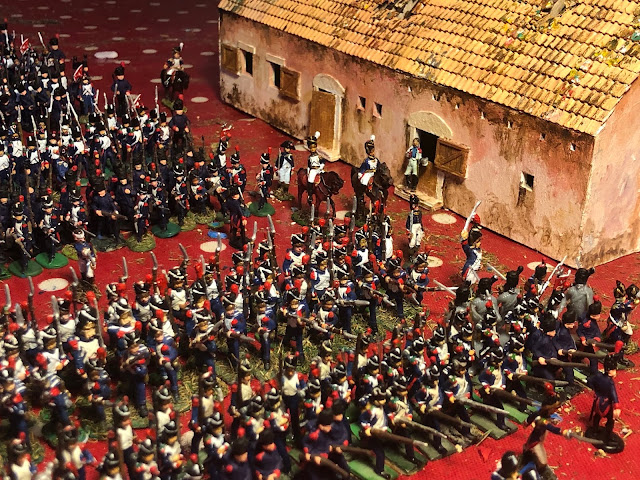 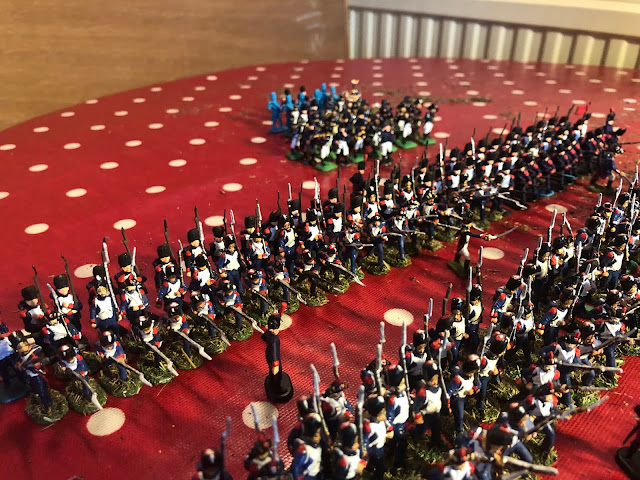 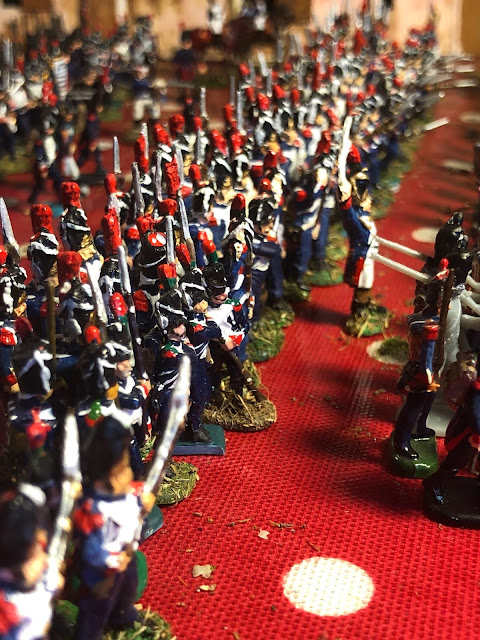 A Question of Scale

To borrow someone else's phrase, the challenge of constructing a diorama of Waterloo is really a question of scale.  To keep to 20mm scale requires a model One Centimetre to the Metre, but unless one has a big enough space and enough figures for every soldier present on the battle (some 180,000), this is simply impractical.

However, to condense the model too much is to fail to convey the distances involved on a Napoleonic battlefield: even for one as compact as Waterloo, distance explains many otherwise illogical parts to the story - the neglect by Napoleon of Hougoumont, the hidden fight at Papelotte, the difficulty of knowing what was happening on Wellington's reverse slope, the length of time it took to realise the mortal threat posed by the Prussians at Plancenoit.

For these reasons, I have always found the Winchester model unconvincing from a military perspective, even if it provides a splendid spectacle.  By contrast, the Siborne model in the National Army Museum is too square and has too much empty space in the corners - it fails to give visual impact even if it is a triumph of topographical exactitude.

So in order to strike a balance between accuracy and impact I have produced an octagonal plan showing the battlefield without the empty corners: 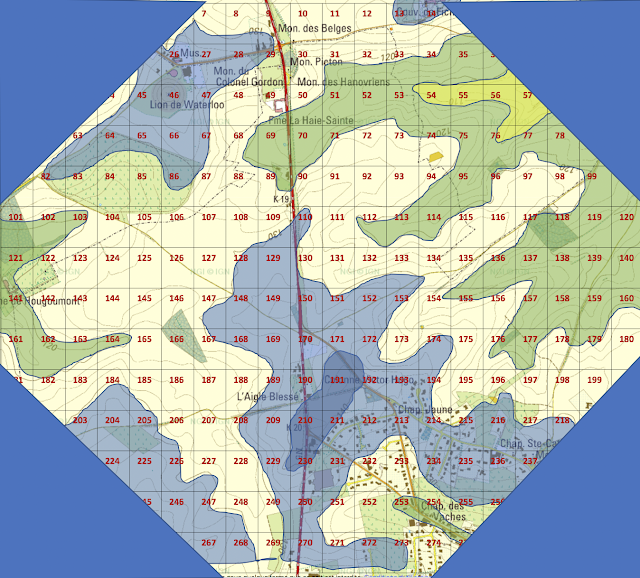 Dark blue = 140m grid line; light blue, 130; green, 120; yellow, 110.  I have removed the four corners and will compromise with the positions of Papelotte and Plancenoit, pulling them slightly to the west to fit them in.  The plan is then gridded with each rectangle equal to one of my existing blocks.

Then, taking advantage of some winter sunshine, I  put my four existing models (Hougoumont, La Haie Sainte, Papelotte and La Belle Alliance out and then deployed my various squares.

The results are somewhat underwhelming and serve to show how much more has to be done, but what it does achieve is a sense of scale. 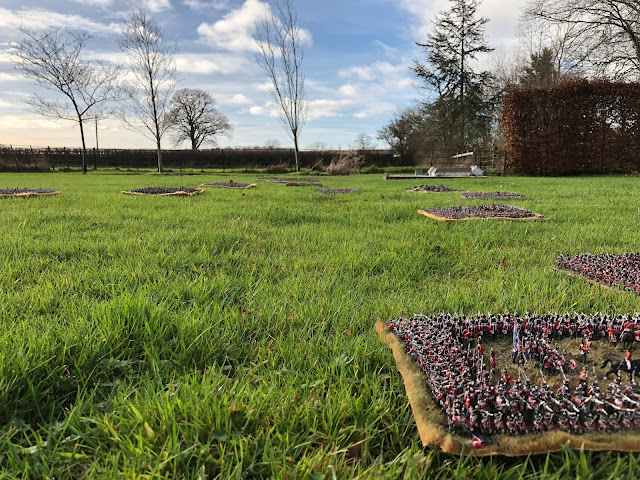 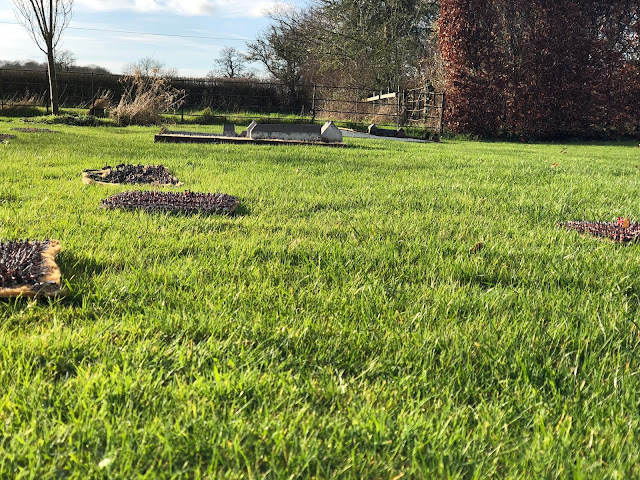 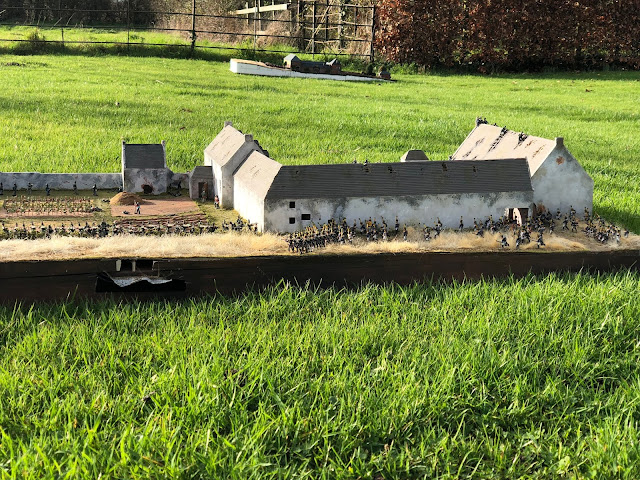 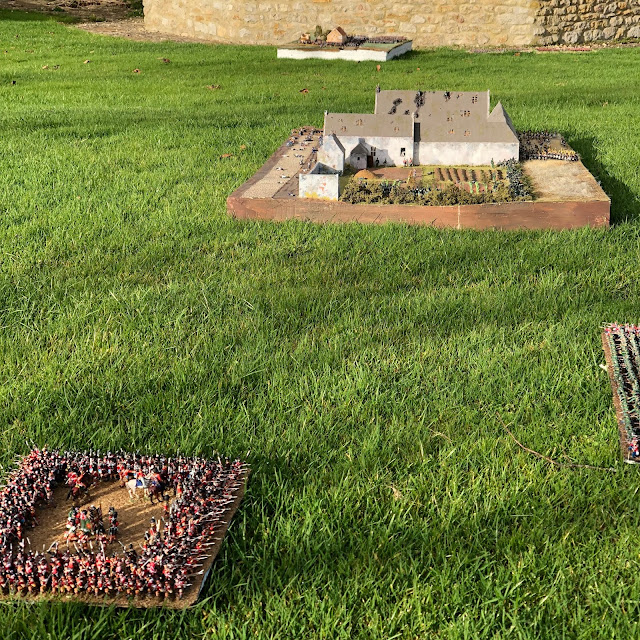 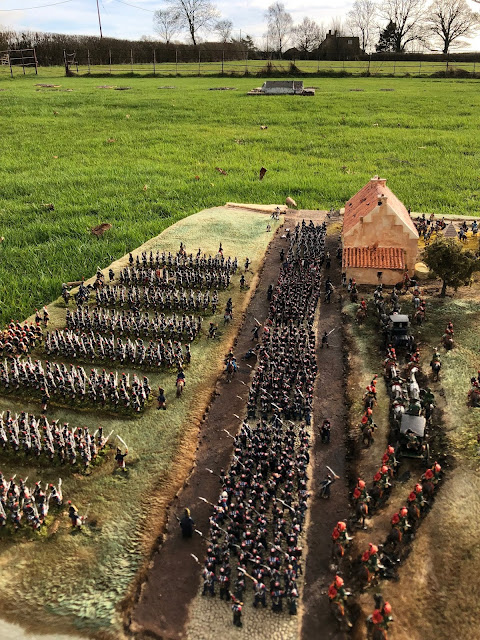 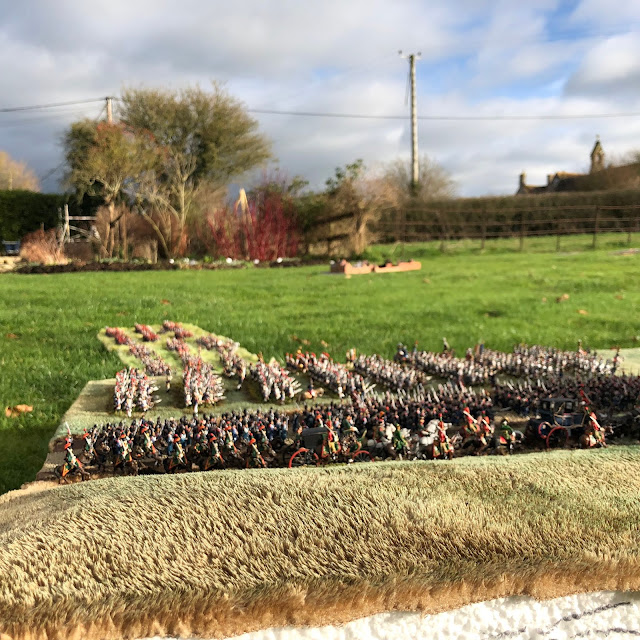 This has been a useful planning exercise for me, but I can't claim it will win many plaudits for excitement - the overriding impression is of a lot of lawn in winter.  Fortunately it didn't rain, which looked a distinct possibility at one point!  As with any good Napoleonic commander, a telescope would have been handy.