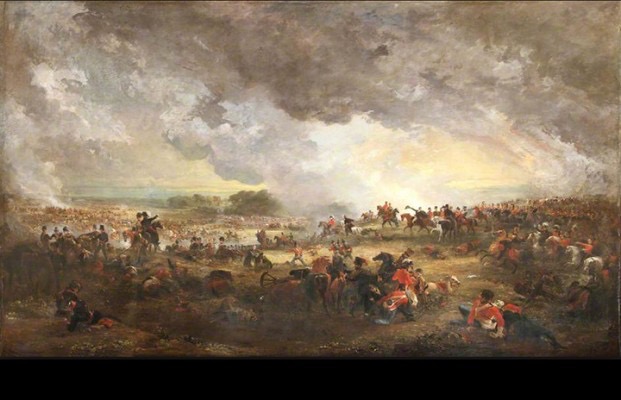 Work is busy at the moment so progress on the project is likely to slow.  I did however think this might be a good moment to take stock of how far I have got with the infantry of the Allied Army.

So far, the following units have been painted and are on the Blog:

I'm not trying to complete every unit in the Allied army, but I do need to show some from each of the brigades, so the obvious gaps are: 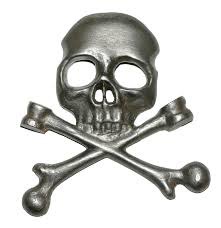 The Brunswickers caught the imagination of the Victorians, whose own uniforms (notably the frogging, shell jackets and peaked caps) owed much to the style set by the black legion created in memory of the Duke of Brunswick, killed in the Jena campaign of 1806. 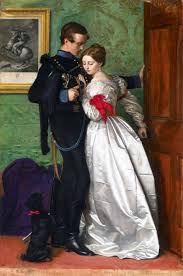 With its tail-less shell jacket and frogging, Brunswick dress was in the main a black version of a Rifles uniform. 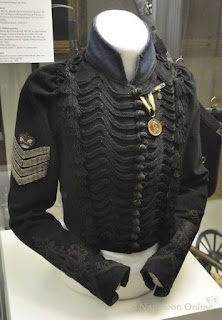 While not as close as Hanover, Brunswick's relationship with Britain was tighter than any other German state, despite the stormy nature of Caroline of Brunswick's failed marriage to the Prince Regent.  The Brunswickers served with distinction in the Peninsula, where the Oels and the AvantGarde were among the best of Wellington's troops.

However, in 1815, the resumption of hostilities meant that the newly liberated Duchy could field a much larger army with Light and Line battalions added to the order of battle.  It is commonly assumed that Europe was exhausted of manpower by 1814, but while that may have been true of France, it was not the case elsewhere: Brunswick, Nassau, Hanover and the Netherlands all seem to have had no difficulty raising very large numbers of fresh troops.  Brunswick's newly raised and often very young soldiers were, to their Peninsular comrades, much as the Hanoverian landwehr were to the KGL.  And yet despite some wobbles, they served with distinction at both Quatre Bras and Waterloo.

The overall impression of this black clad legion was a sombre one.  As one account has it, they gave: "A most appalling and funeral-solemnic appearance. Drawn up in battle array they look an immense mourning hearse: the gloomy appearance of this determined band who had devoted themselves with their chief to avenge the wrongs of their prince...".

The 'chief' in question was of course the younger Duke of Brunswick, brother of Caroline.  Like his father before him, he too would become a casualty, mortally wounded at Quatre Bras.  As with Picton's Division, Quatre Bras features almost as much in Brunswick accounts as does Waterloo. 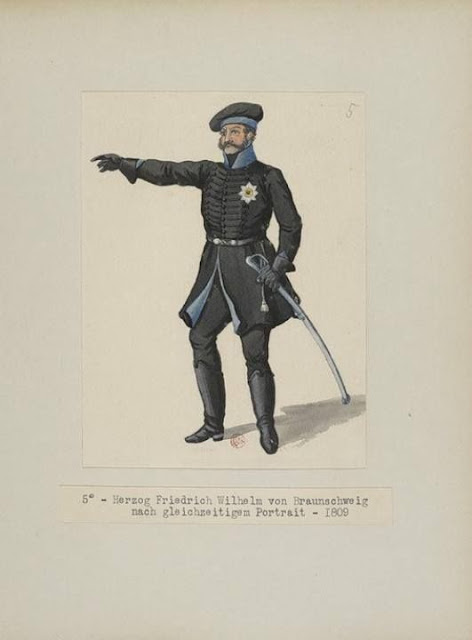 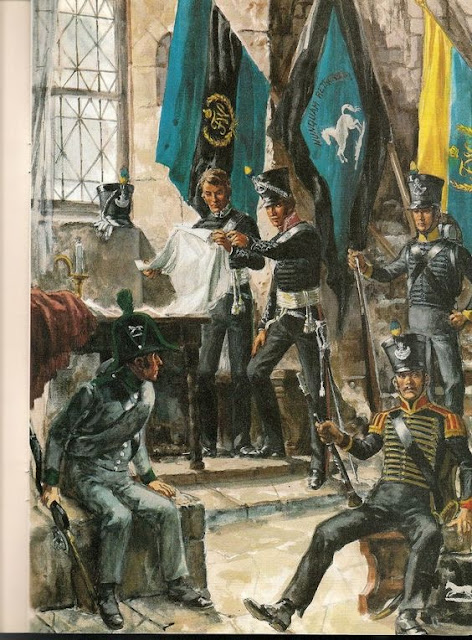 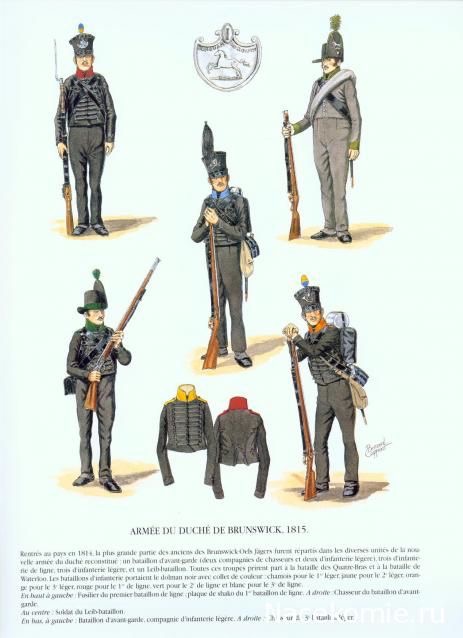 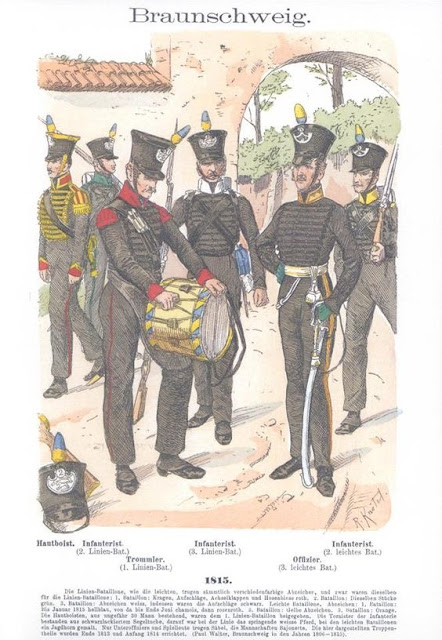 After Quatre Bras, Waterloo was itself an extreme test and one in the main that the Brunswickers passed with distinction.  The Brunswick contingent was divided into three parts: first, the cavalry; secondly, those committed to the defence of Hougoumont (the Leib-Batallion, the Avantgarde and the 1st Light Battalion).  Thirdly, the 2nd and 3rd Light Battalions and the three Line battalions stood with the other squares in the Allied right-centre.

These were initially in reserve until called forward by Wellington to cover the gap left by the Foot Guards moved to Hougoumont.   This blog entry is focussed on these Brunswick squares, notably the 2nd Light Battalion.

Despite their relative youth, these Brunswick squares managed to hold through the cavalry charges but were deemed to be unsteady by Captain Mercer who commanded the adjacent RHA battery.    Near the climax of the battle, Colonel Detmers of Chasse's Dutch division described  the 35th Belgian Jagers battalion, the 2nd Dutch battalion of Line infantry and Van Wetering’s 4th Dutch Militia battalion deploying into line on the left of the combined British 30th and 73rd Regiments, described as still in good order, and in a position in front of retiring Brunswickers, reduced by casualties from a square to a triangle.

So here is the square.  The figures are mostly the Esci Russians with the short tails on their jackets trimmed off.  I've added yellow over blue pompoms to their shakos.  There are also some Art Miniaturen among the figures.  There are quite a few ACW conversions, including many in the rear rank which are the new Strelets Picket's Charge set with Russian heads. 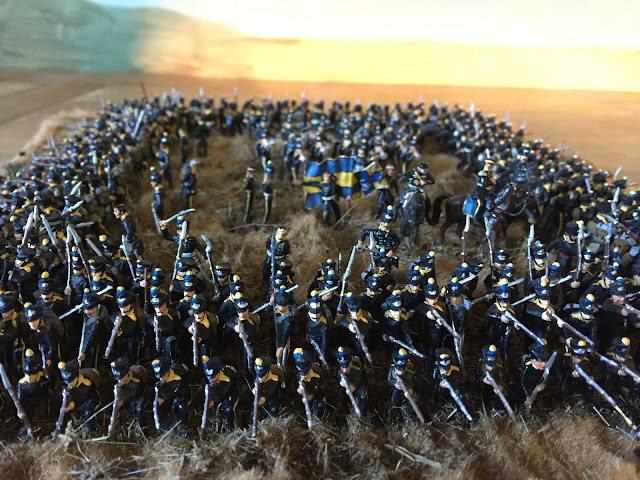 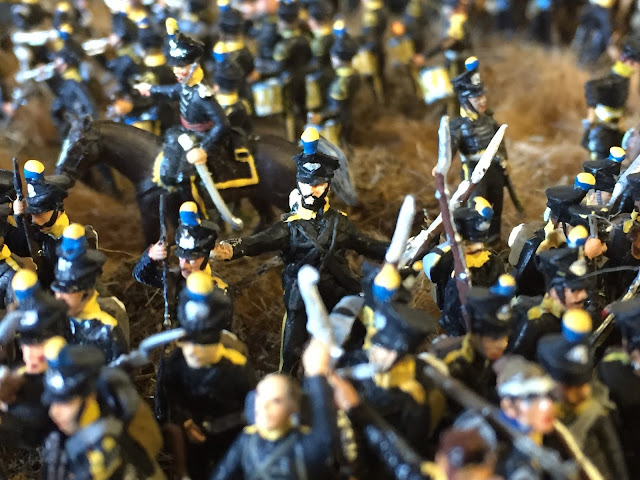 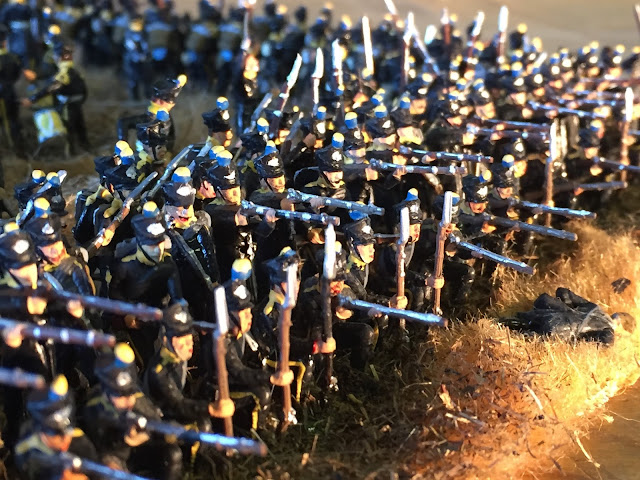 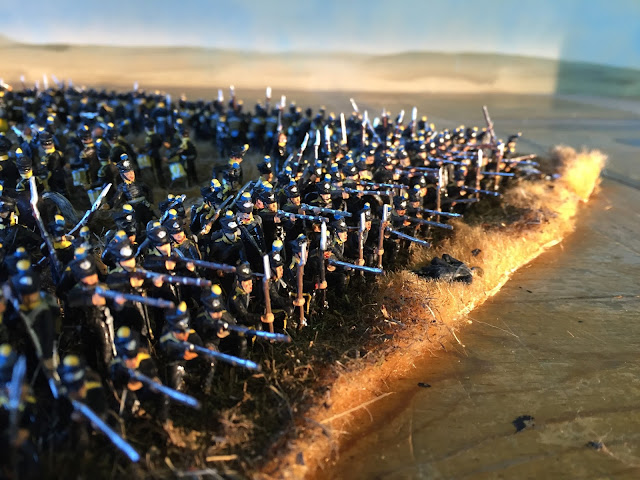 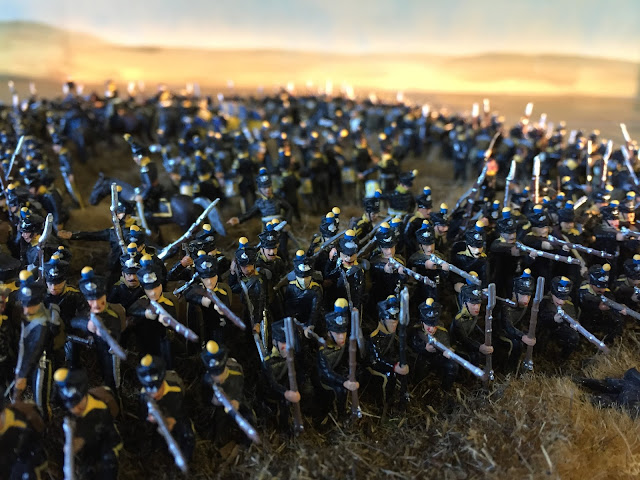 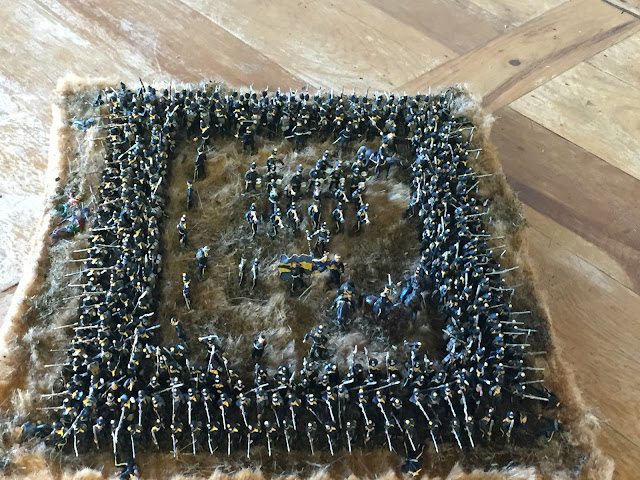 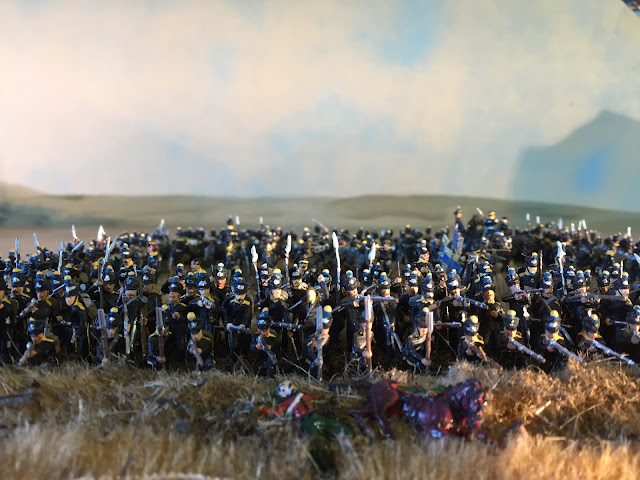 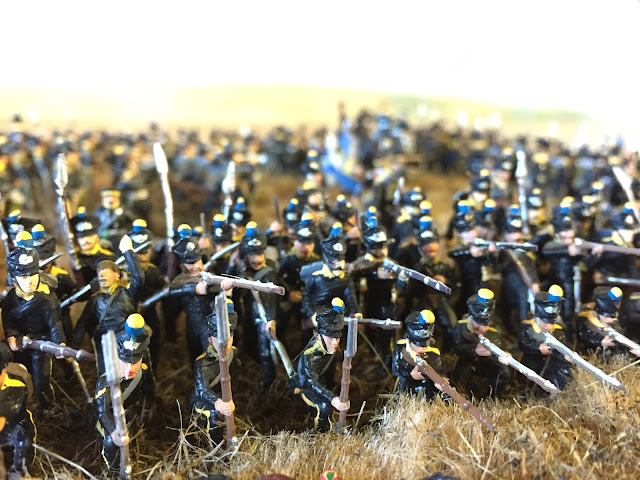 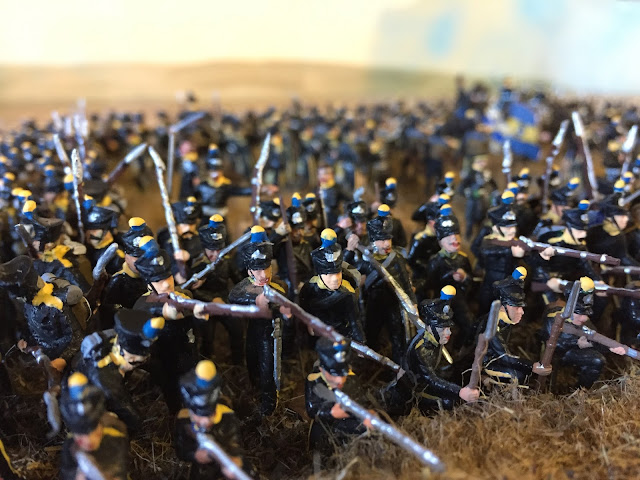 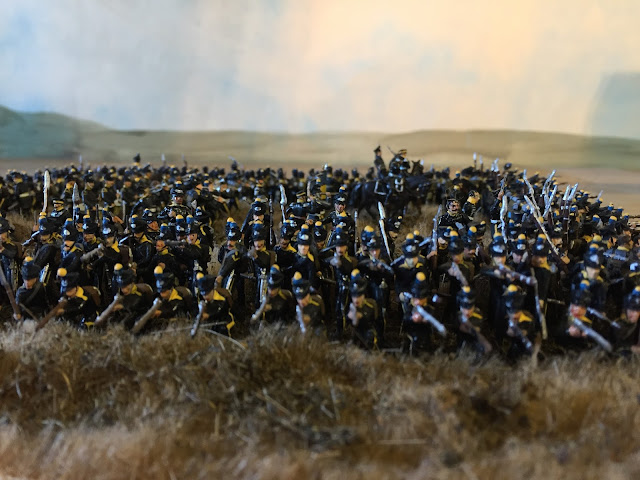 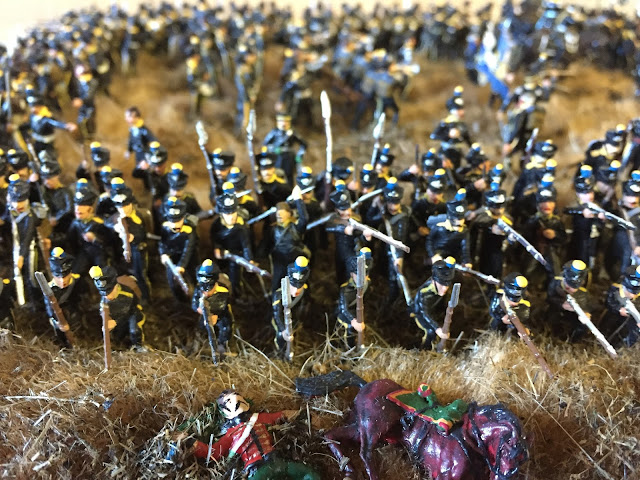 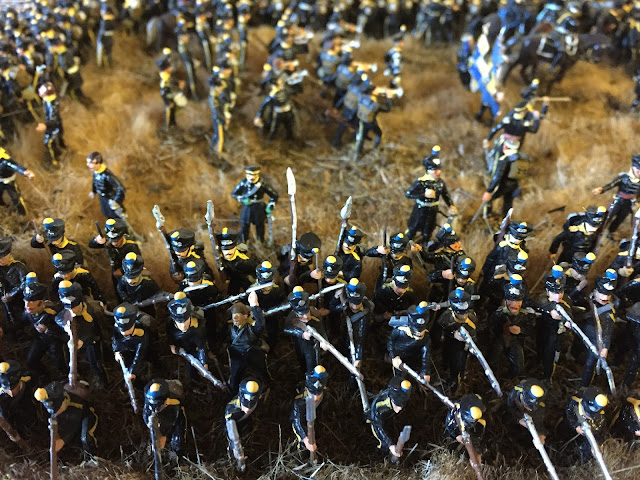 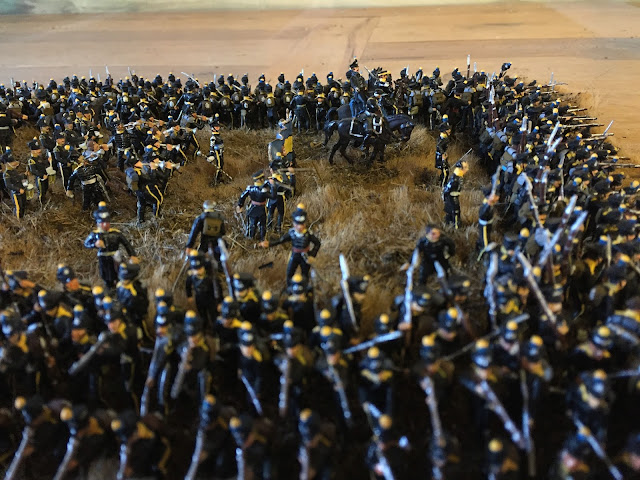 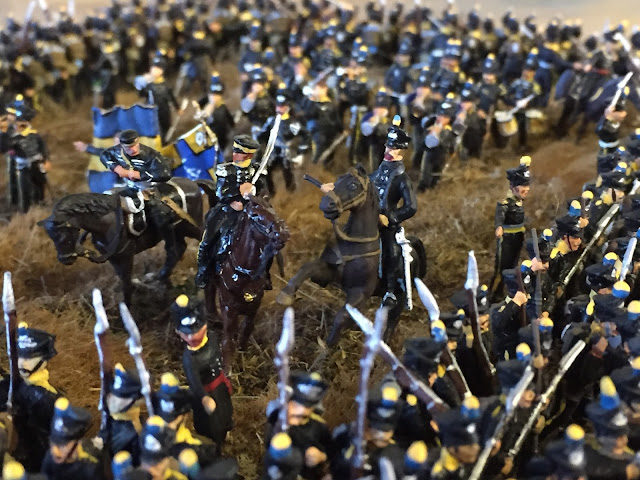 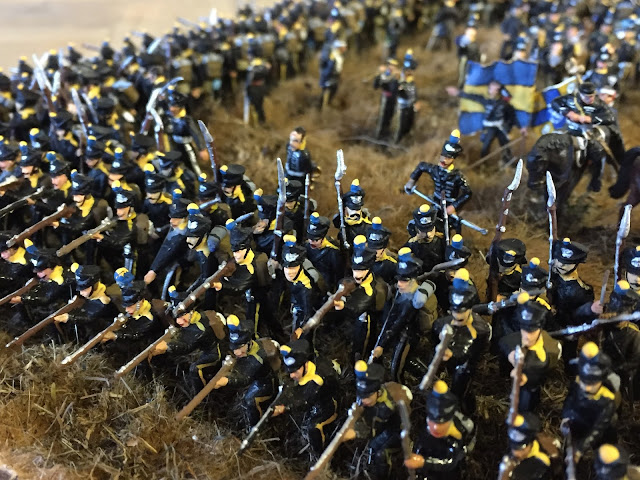 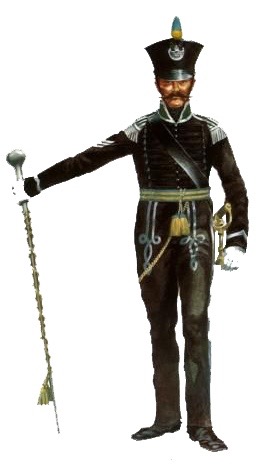 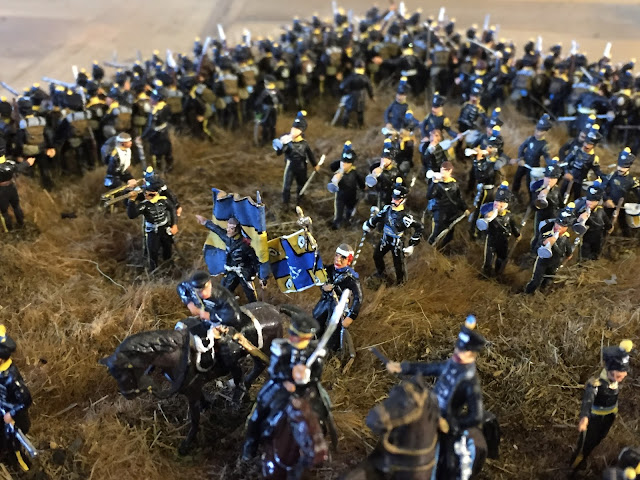 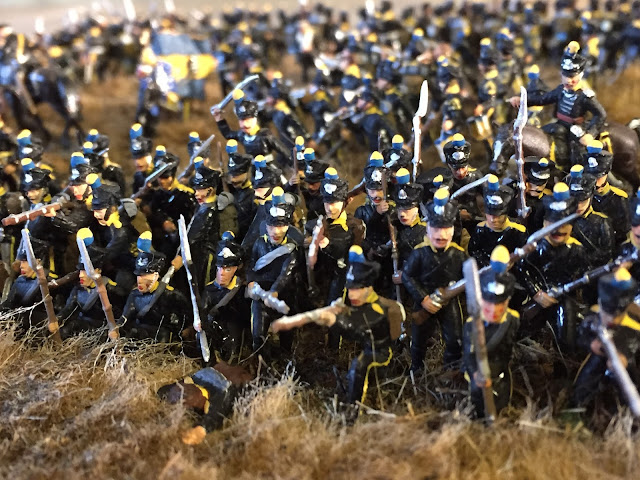