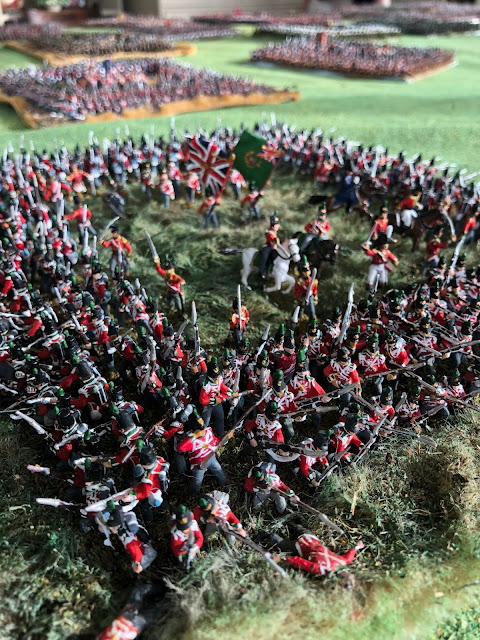 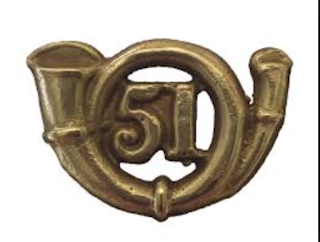 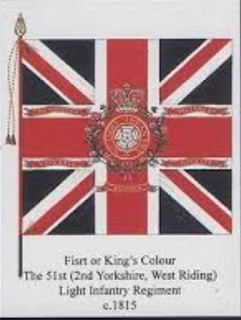 The 51st are shown here in square, which is how the bulk of the companies were formed at the peak of the French cavalry attacks, but my researches revealed a rather more classically Light Infantry role for the Regiment earlier in the battle.  While the overall role is easy to grasp there are aspects of the detail that are harder to follow, as this Regimental account shows:

"On the morning of the 18th June, the 51st was composed of two field officers, nine captains, 28 subalterns, six staff, thirty-nine sergeants, eighteen drummers and five hundred and twenty-one privates.  The battalion was part of Colonel Mitchell’s brigade being ordered to occupy a portion of the narrow road leading to the junction of the Hougoumont avenue with the Nivelles road towards Braine le Comte. 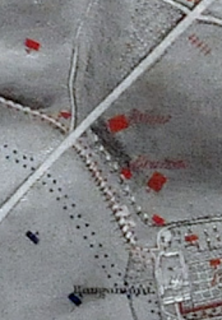 On the morning of the 18th, the brigade moved down to the right of the British position, and halted in columns of regiments about four hundred yards in rear of Hougoumont, awaiting in intense expectation the commencement of the action. The light company of the 23rd [Royal Welch Fusiliers] was then pushed forward to hold the avenue at its junction with the road. On its right was an abattis thrown across the great road, and close upon the right of this obstacle a company of the 51st was posted. Four more companies of the regiment, led by Captain Phelps, and the light company of the 14th were extended along the hollow way stretching across the ridge to the extreme left of the French position. It was their duty to engage the skirmishers covering the advance of Reille's corps and then inflict what loss they could upon the denser columns as they passed.

The remainder of the 51st stood initially in column of support and then in square, about 200 yards in rear of the hollow way. Owing to the undulating nature of the ground and the high standing corn, the skirmishers of the 51st, led by Captain Phelps, did not come in contact with the enemy's light troops covering the advance of their columns until within about forty paces; then opening fire and cheering loudly they pushed forward resolutely, causing the French to fall back, although supported by cavalry. [This would suggest that Reille's Corps advanced much further and in greater numbers around the North-West side of Hougoumont, it is hard to believe that is true so early in the battle].

Directly afterwards an order from Lord Hill caused them to retire upon the regiment where they remained the whole day close to Hougoumont, alternately advancing and retiring with the ebb and flow of the tide of battle.

During the heavy fighting between the British and French cavalry, who strove to penetrate the allied squares, a body of cuirassiers, having been intercepted in its direct line of retreat by a party of British Light Dragoons was induced to surrender; but taking advantage of the weakness of their escort, the cuirassiers suddenly broke away and galloped down the Nivelles road hoping to reach the French lines. They were fatally deceived. As they passed the high bank, covered with brushwood, on the right of the road where a detachment of the 51st was stationed in support of the light troops extended in front of the extreme right, they were fired upon, though but partially, in consequence of the close pursuit of the Light Dragoons.

This firing attracted the attention of Captain Ross of the 61st, who was stationed with his company more in advance, and close to the abattis thrown across the road, near the head of the Hougoumont avenue. Captain Ross, being thus prepared, also fired upon the cuirassiers, whereupon their commanding officer finding all further retreat cut off by the abattis, surrendered to Captain Ross, declaring he would not give himself up to the dragoons. Eighty of the cuirassiers and twelve of their horses were killed, and the remainder, about sixty, taken or dispersed.

In this position, which the regiment held until the close of the battle, it was several times furiously assailed by the French artillery as well as the cavalry. It also participated more or less in repelling the attacks on Hougoumont; but its severest struggle was, as we have already mentioned, with the skirmishers covering the advance of Reille's corps. Its total losses were eight rank and file killed: Capt. S. Beardsley, Lieutenant J. Flamank, Lieutenant 0. W. Tyndale, and twenty rank and file wounded. In the action with Reille's skirmishers. Captain Phelps's company of seventy men is said alone to have lost twelve men killed and wounded in about ten minutes.

In consequence of the victory. Colonel Mitchell and Lieutenant-Colonel Rice were appointed Companions of the Bath. The regiment bears the word " Waterloo " upon its colours. During the night succeeding the battle. Colonel Mitchell's brigade lay on their arms in the wood of Hougoumont, and early next morning commenced their march to Nivelles and its vicinity, where they remained for the night, as the troops had not been rationed for two days. At Nivelles Sir Charles Colville thanked the 4th Brigade for its distinguished bravery." 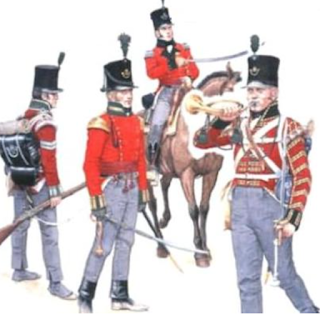 Turning now to my square, the figures are the usual mix of Hat, Emhar, Kennington, New Line, Hinton Hunt, Kriegspieler, with a great many conversions. 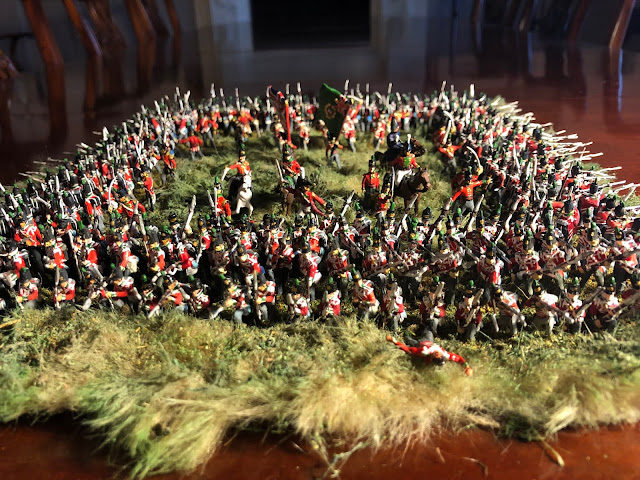 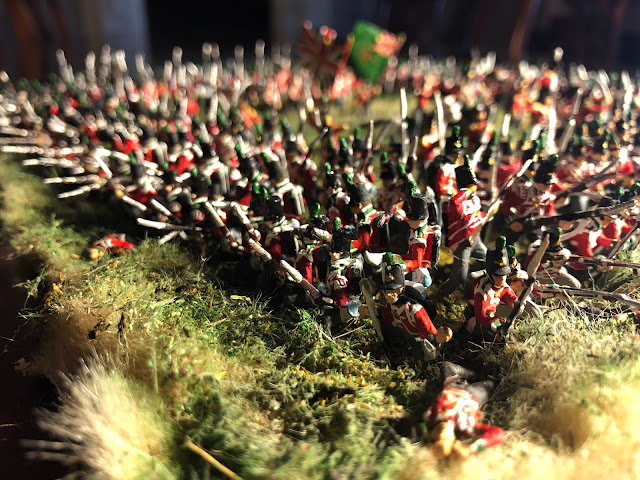 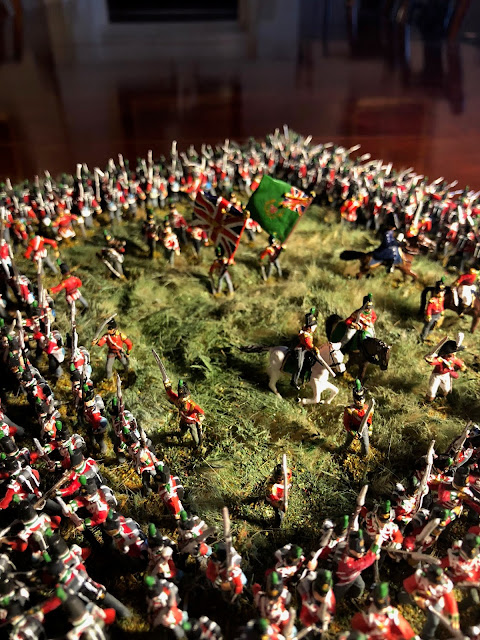 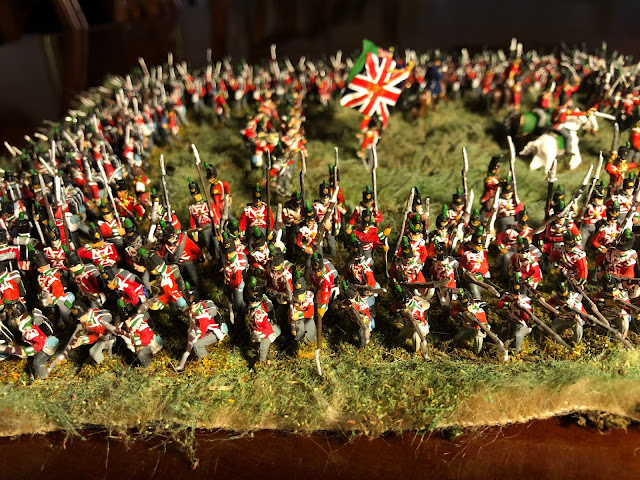 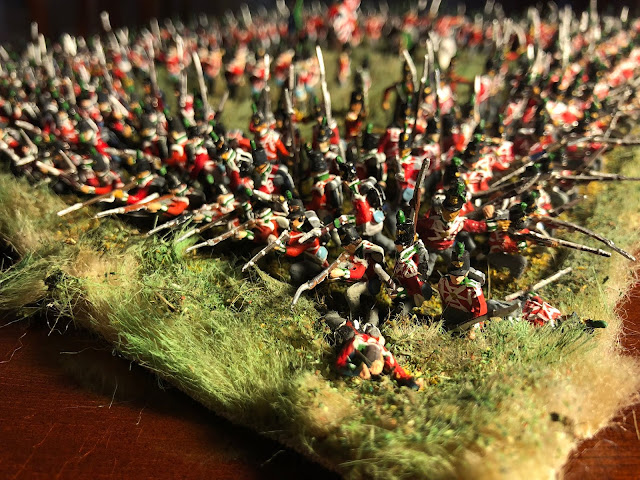 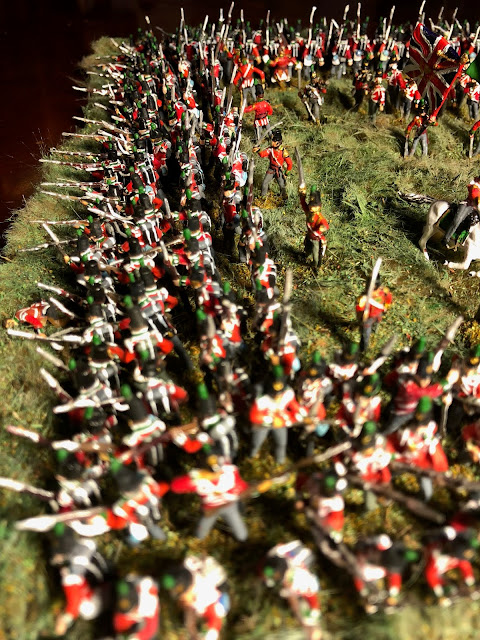 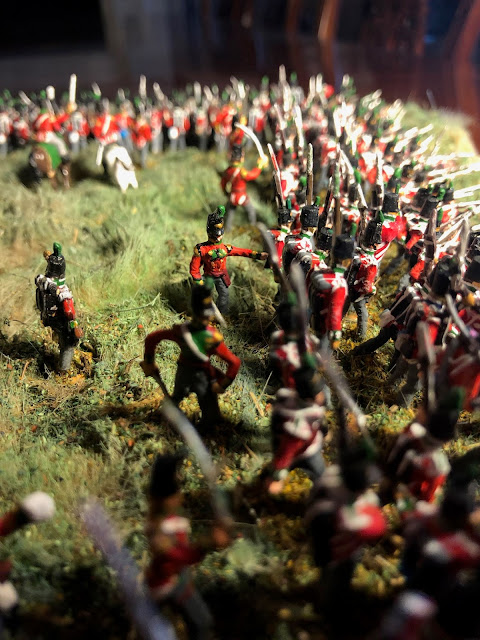 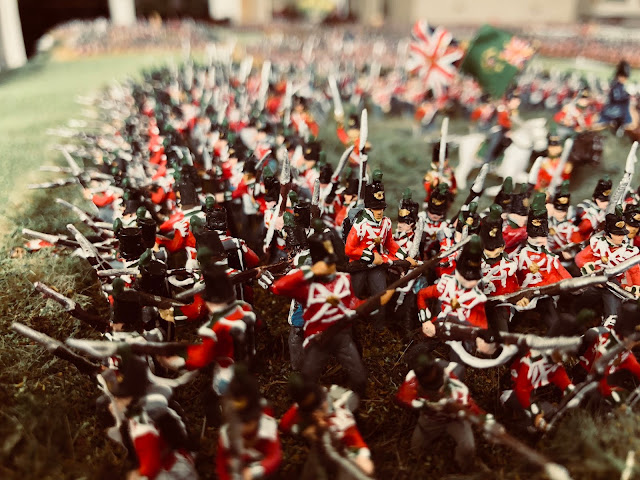 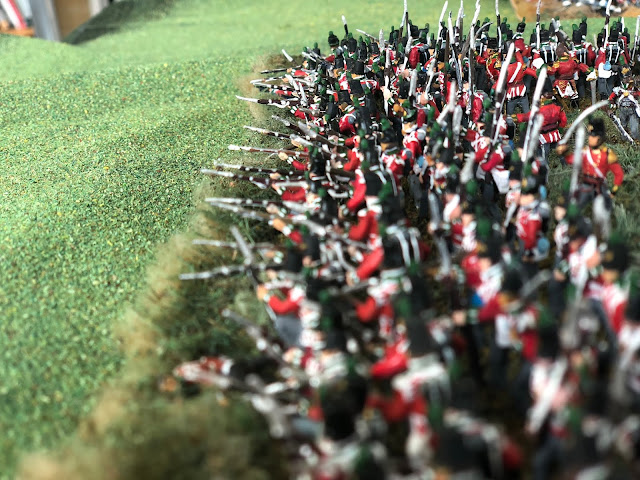 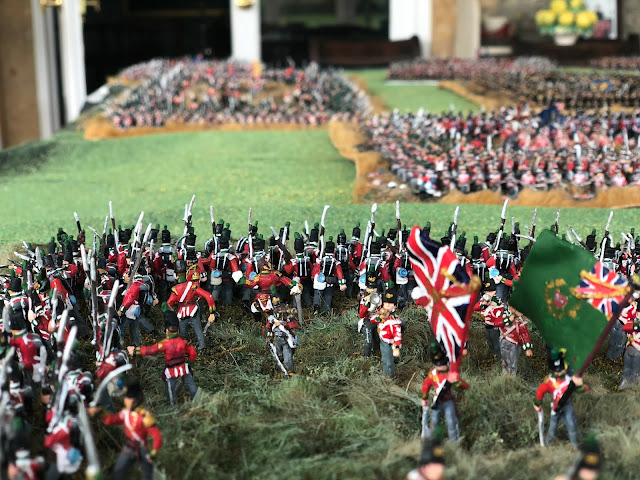 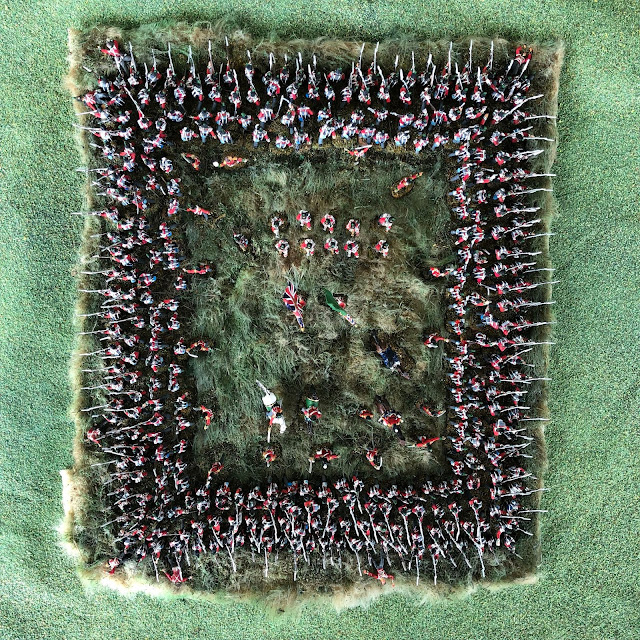 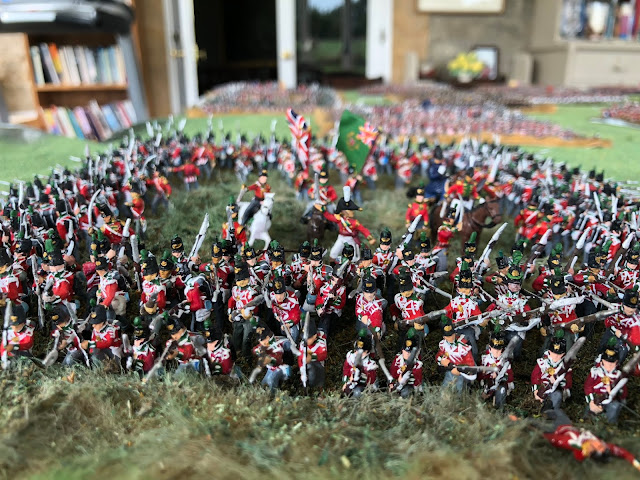 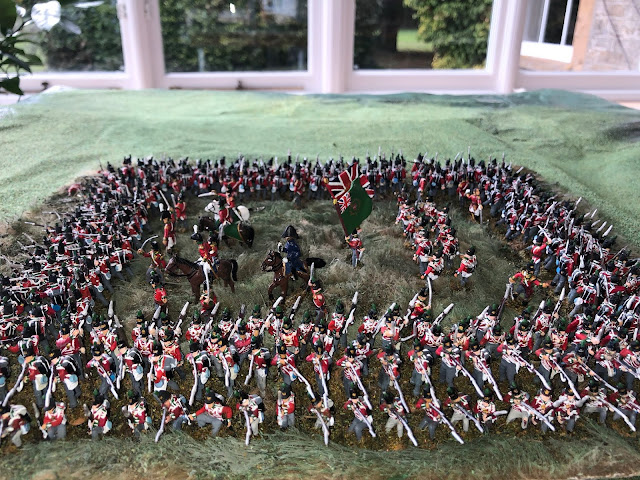 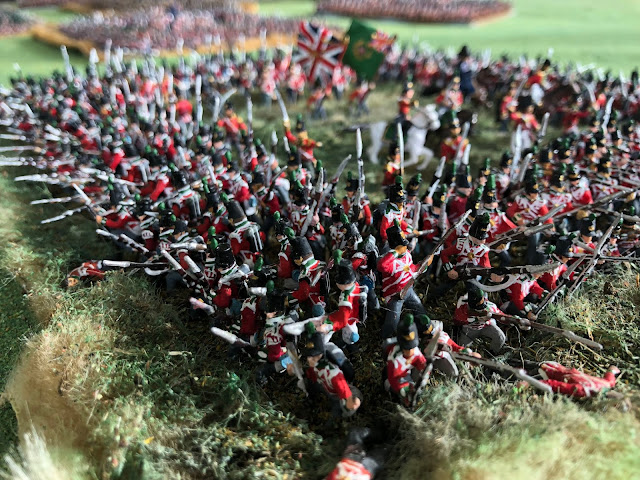 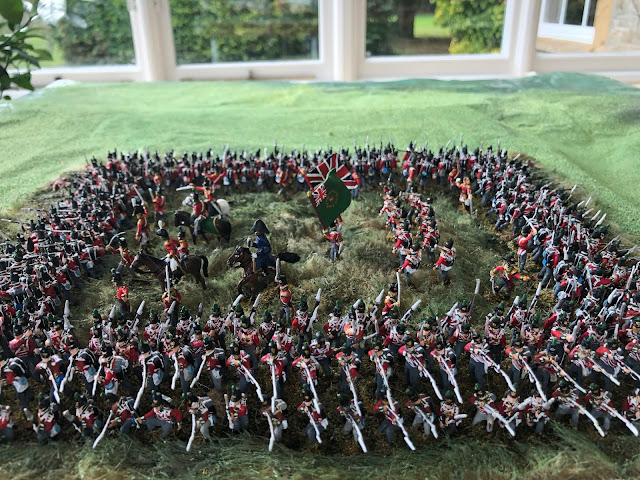 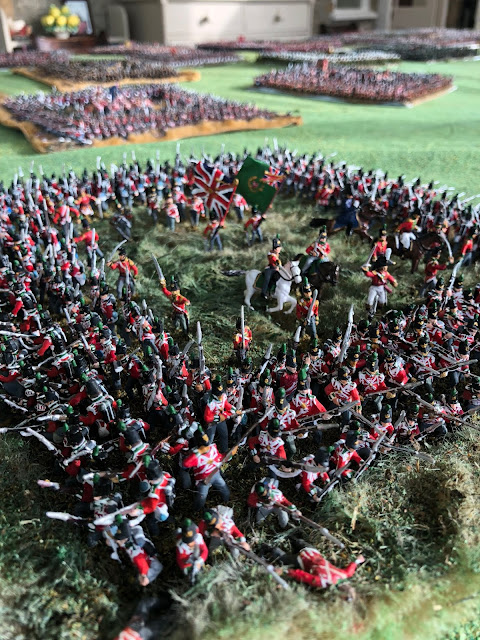 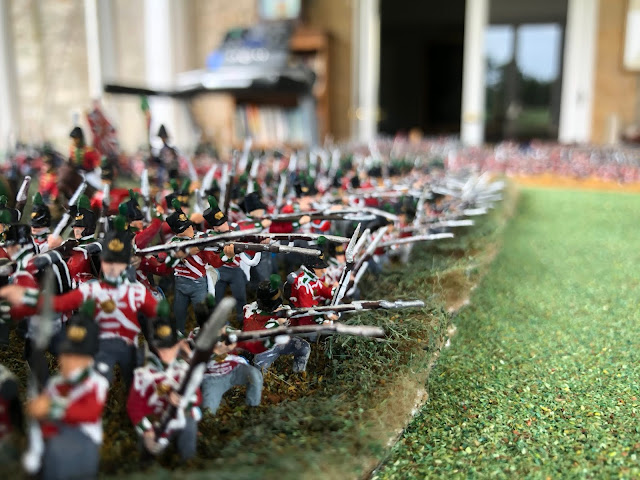 A few pictures below of other squares, which are placed on some green scenery - clearly, in the final model they will be properly integrated with the landscape, following the crop scheme shown on the Siborne model.  The squares are also much closer together than in reality. 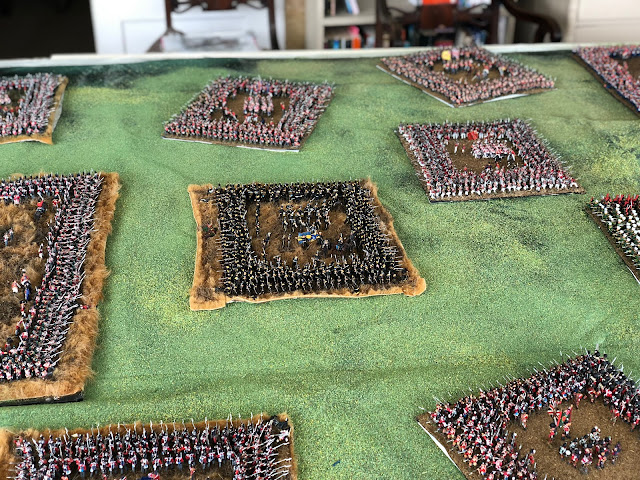 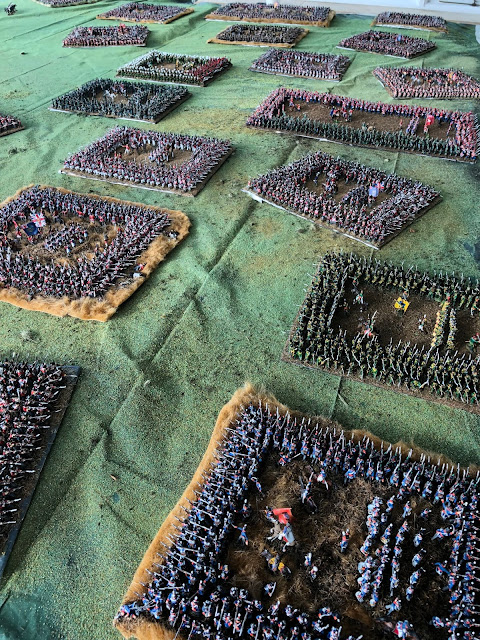 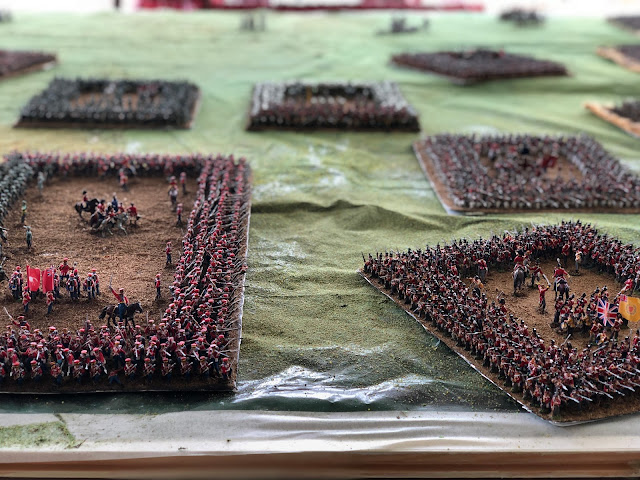