Chasseurs a Pied of the Old Guard 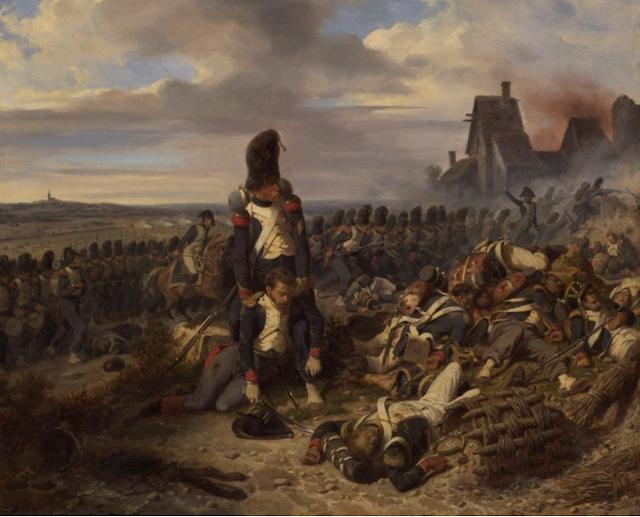 If one thinks of the Old Guard, the immediate image is of a Grenadier as the classic Grognard.  And yet for most of the Guard's history there were as many Chasseurs as Grenadiers.  The relative proportion of drawings and paintings shows this discrepancy: for every Chasseur there must be at least five images of a Grenadier.  Given the similarity of their uniforms this is understandable - the differences relate to the absence of a front plate and back patch on the bearskin cap, different cuffs and green over red, rather than just red plumes and epaulettes.  Their tactical use was also identical: whatever their light infantry origins, Napoleon did not employ the Chasseurs a Pied any differently from the Grenadiers - heavy shock troops held in reserve until absolutely necessary.

The Chasseurs a Pied of the Consular Guard were created by a decree of the Consuls of November 28, 1799. This decree, which specified that the unit should be recruited only among the men who distinguished themselves on the battlefields, and would consist of  a company of light infantry and two battalions of grenadiers. The Chasseurs, although composed of only one company, carried a Colour.

On 8 September 1800, the Guard was reinforced: the infantry was increased to three battalions of eight companies, two of Grenadiers and one of Chasseurs. Admission requirements were as follows: taken part in at least three campaigns; received awards for bravery or received injuries; fit to serve; a minimum height of 5 foot 3 inches for Chasseurs (5 feet 6 inches for Grenadiers); and an impeccable conduct record.

On 14 November 1801, a new decree of the Consuls reorganised the Guard.  By absorbing the foot guides of the army of Egypt, recently repatriated, the Chasseurs were brought up to the same strength as the Grenadiers with two battalions.

Each of these corps was commanded by a brigade commander under the general commanding the Guard infantry. General de Brigade Soulés commanded the Chasseurs. On 1st November 1805 a new battalion was created composed of Velites.

On 8 April 1815, the Imperial Guard regained its title and status.  For the first time, three regiments of Foot Chasseurs each of of two battalions of four companies was formed. The third regiment was classed as Middle Guard, recruited from elements of the Young and Old Guards as well as the Line, making a total of 3600 men. On 9 May 1815, a fourth regiment of Chasseurs was created but with just one battalion. 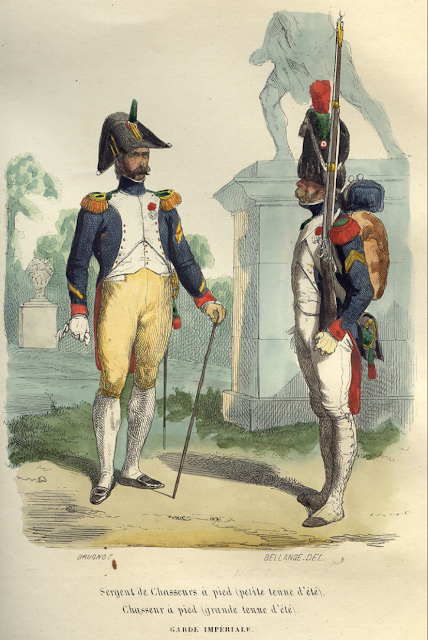 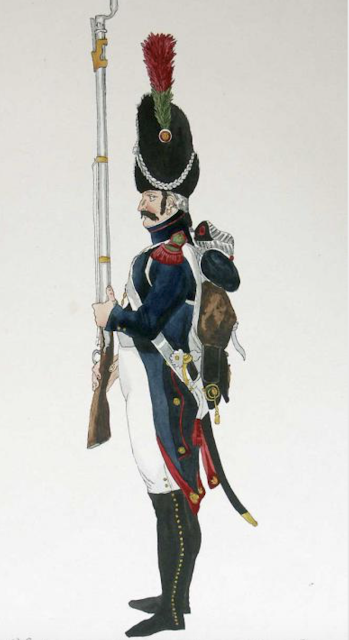 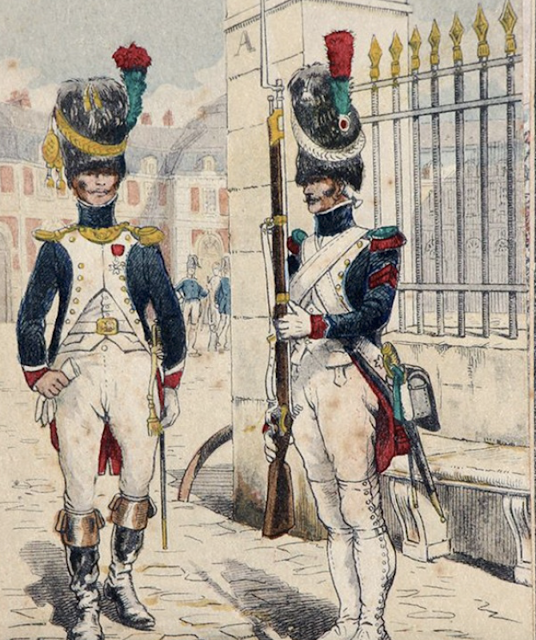 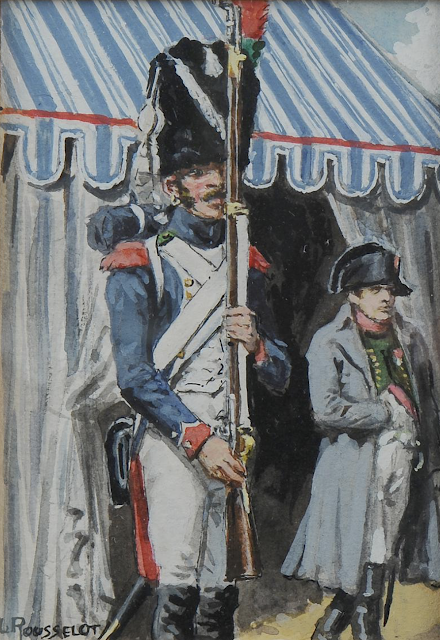 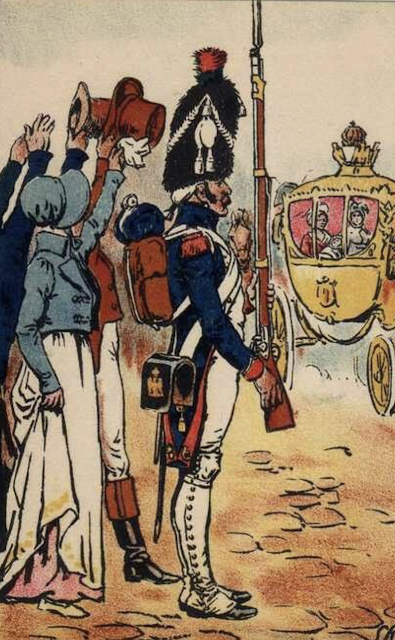 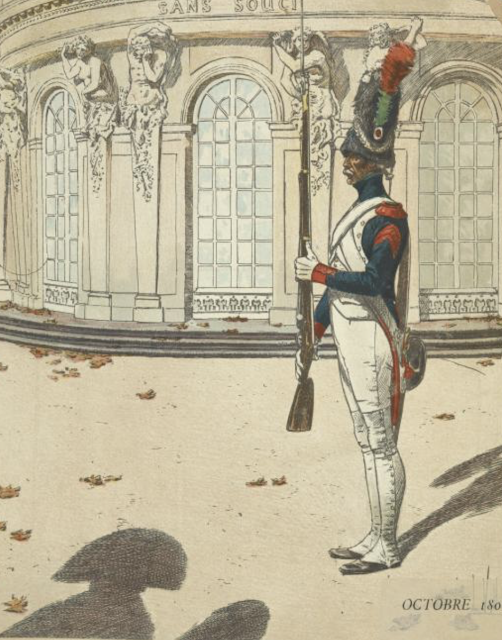 This post shows the Second Battalion of the First Chasseurs in column of four companies, the Band, corps of Drums, Pioneers, Eagle, Porte Aigles, Field and Subaltern officers and ancillary General officers, totalling 410 men.  The First Chasseurs was commanded by General Cambronne.


The Second Battalion will be shown near La Belle Alliance (the completion of which is approaching), from which location it went forward in support of the attack of the Middle Guard; Cambronne's part in this attack is of course the stuff of legend although as with all the best legends the details are highly disputed.

The First Battalion was kept further south to guard the imperial baggage at Le Caillou and so the Second Battalion carried the Eagle, which was nearly lost when 2/1 Chasseurs lost cohesion during the chaos that followed the defeat of the Middle Guard and the capture of Cambronne.  The Eagle was not in fact captured and Lt Martin, the Eagle bearer, took refuge in the square of 2/2 Chasseurs, rejoining the survivors of his own unit at Laon.

The figures are almost all vintage metal - mostly Hinton Hunt, with some Alberken, Lamming, Les Higgins, Douglas and a few Newline to make up numbers to 360 in the rank and file.  They will be transposed onto the section of the model showing La Belle Alliance shortly. 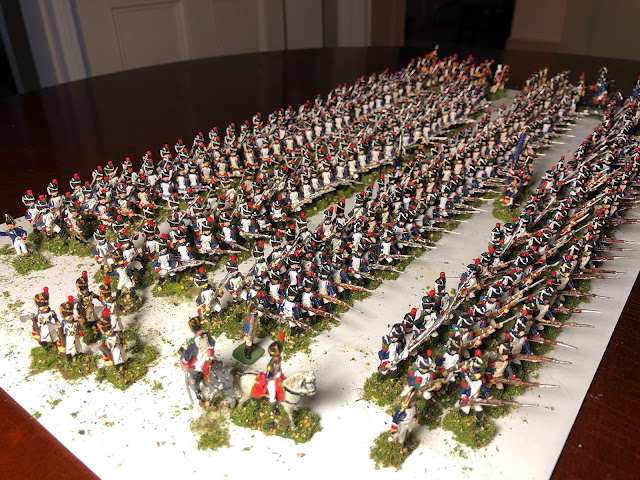 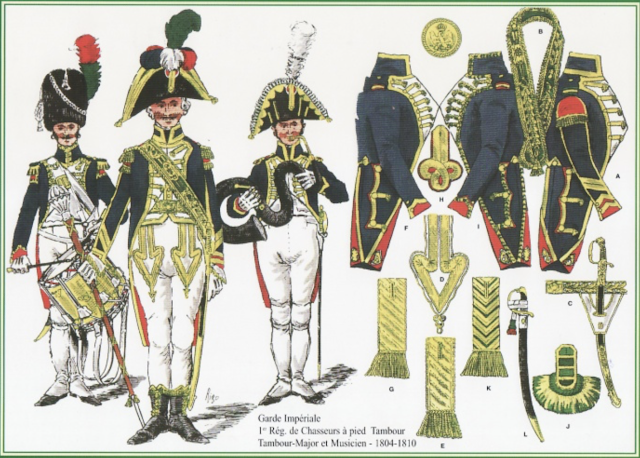 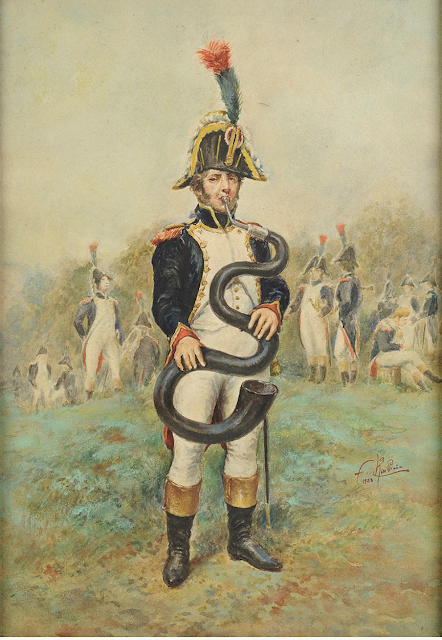 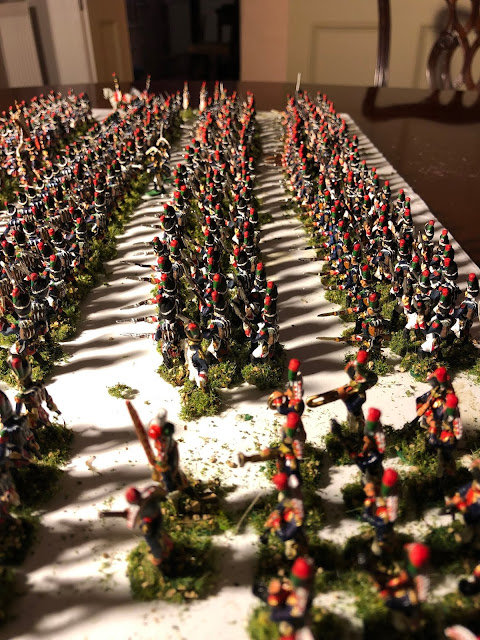 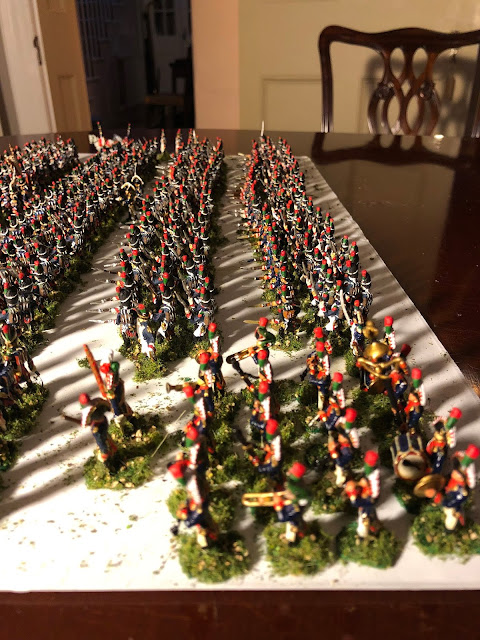 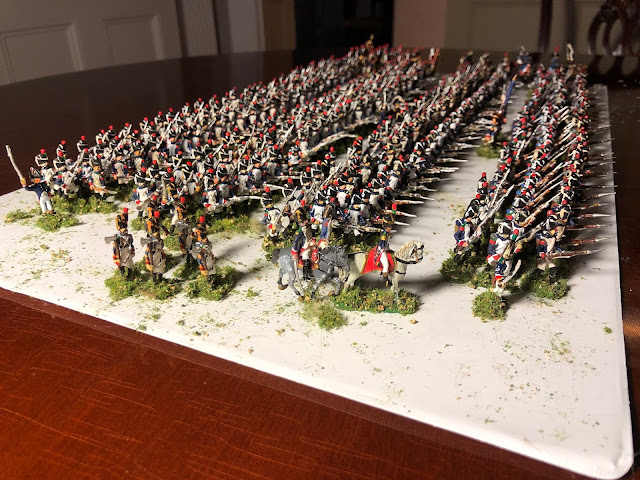