I would argue that the key to the defence of Hougoumont was the garden wall.  Its height necessitated the construction of a firing platform and loopholing to allow fire from ground level.  Its value lay not only in its robust construction but in the open ground to its front, known appropriately as the 'Killing Zone'.

Waterloo Uncovered's work suggests that the wall was breached by the French - the scatter of Charleville rounds is particularly concentrated just inside the wall at its mid point, so I shall be showing such a breach - we must assume that a British or Nassau counter-attack eventually plugged the gap. 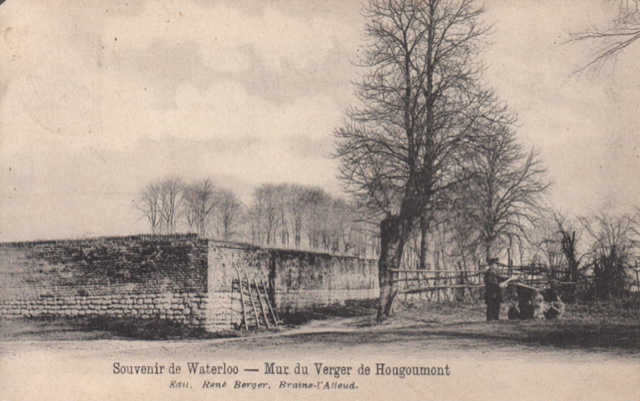 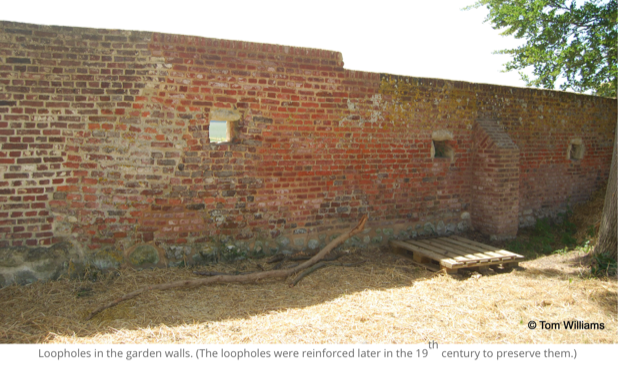 One of the most valuable aspects of the 3D scan is that it is possible to see just how long the garden wall actually is.  It is no wonder that its defence necessitated the deployment of Foot Guards Light companies near to the Chateau, Nassauers in the centre and 2nd Coldstream at the east end. 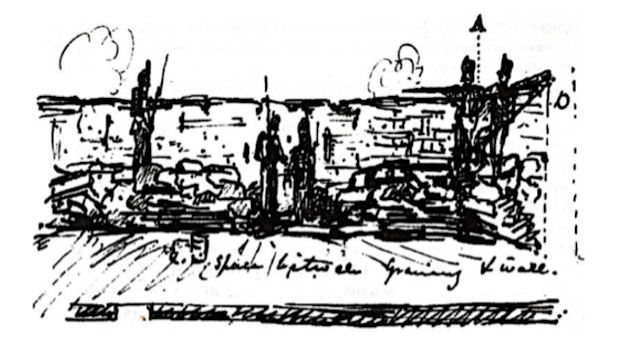 This sketch is in the British library and was done by Charles Southey who visited Hougoumont with Edward Nash in October 1815.  He noticed that there were piles of rubble and surmised that it came from the demolition of the wall between the garden and the buildings.  He imagined the troops standing on top of the rubble and firing through loopholes.  Given the length of the wall it's hard to believe that enough rubble could have been found and I believe that a composite of loopholes, rubble and improvised firing platforms from doors and furniture would have been used.

His accompanying letter reads as follows:

Dear Sir,
Colonel Berkeley Drummond has been staying with me for some time – and told me that you were anxious to obtain some information as to the sort of ‘Defence’ which was executed inside the wall at Hougoumont.

I was for many years in the 3rd Regiment (since June 1815) and have heard many officers describe the action of the 18th of June.

In the year 1816 I made some drawings of the different objects of interest and now enclose you the only one I can at the moment put my hand on. I cannot vouch for the accuracy of the drawings at this distance of time.

There is a fault in the perspective at the angle of the wall – this I think I made purposely in order to show that the wall stood someway in advance of he farm wing. I should say that I remember seeing a sort of rough platform inside the wall, made of stone. Taken I think from a cross wall which separated the homestead from the kitchen garden.

I will endeavour to show my recollection of the appearance of the platform by a rough drawing from the main house and grounds.

I think that there was a way in to this space from a window which had been broken away to make a passage.

The wall was higher perhaps than my sketch would represent.

Whether the platform was at the angle A or commence at B I cannot positively say – but as it must have been a great object to defend the curtain, I have little doubt but that it was at A. Captain Evelyn and the Light Company of the 3rd Regiment made the ‘Defence’. Evelyn was a very ingenious man, and acquired great credit in the regiment for the manner in which he affected the duty allocated to him. Captain Elrington (Who has now left the regiment and is living in Wales) has I am quite sure a most accurate recollection of every particular of the French attack in this quarter – he was stationed I know at the gate – and used to describe the affair with great accuracy of detail.


Drummond left me without taking the drawing, and I now send it to you – and if it is of the slightest use – I shall be most happy to think that I have been able to afford you any information however trivial.

Believe me, faithfully yours CHARLES FAIRFIELD
While the story of Hougoumont is told with a very heavy slant to the light companies of the Foot Guards, the garrison in fact contained many Germans.  Bugsen's Nassau battalion was detached from the east flank of the battlefield.  Bugsen deployed two companies of 270 men into the wood to assist Brunswick Field Jagers and some Lunebergers; these then fell back into the garden.  He also placed another company in the Great Orchard, and two more companies in the formal garden.  His Grenadier company was placed in the farm complex.  The problem with the Nassau battalion is that it is very hard to assess just how central it was to the overall success of the defence.  The relatively few casualties that it suffered compared to the Foot Guards, suggests that it was not as heavily committed as might be supposed.


The North Side - the Covered Way

There are no good pictures of what the Covered Way looked like in 1815, but at its west extremity the evidence suggests some brick kilns and on the map, the location of a pond.

There is evidence that the French were able to make good use of the west flank of the farm - they used the high ground opposite to deploy artillery and were able to gain entry through the small door, but were expelled.  It's not hard to see how this would have been difficult for the British - they were effectively blind to what the French were doing.

The lay out of the garden in 1815 is perhaps the most contentious aspect of Hougoumont. To what extent did the formal parterres of the 18th century garden endure into the early 19th Century?

So turning now to the model.  The first few shots are rather grainy having been taken in my barn by another camera.


And now some better shots with a good camera showing one of the six sections:

Postscript: for some reason I am having trouble posting replies to messages, so for Lee and Stryker, may thanks for your kind comments, they are much appreciated.  I attach some conversions from Speira miniatures.  These are 3 D printed ACW figures.  One of the problems for Napoleonic diorama makers is the relative lack of action poses.  ACW figures can quite easily be changed to British Napoleonic figures - trousers, not gaiters, square packs and similar cross belts.  All that's needed are new heads! 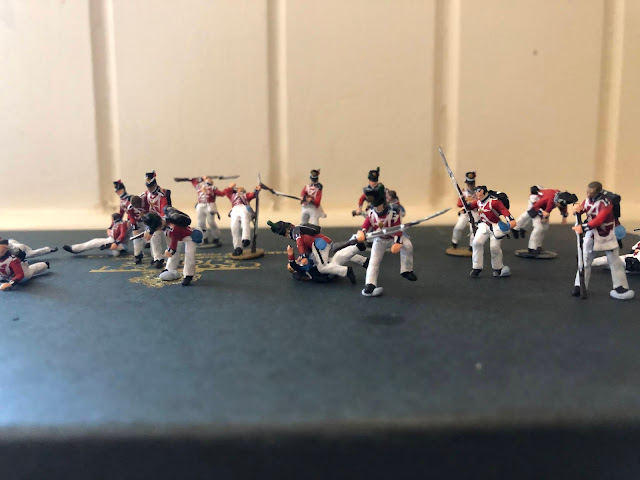 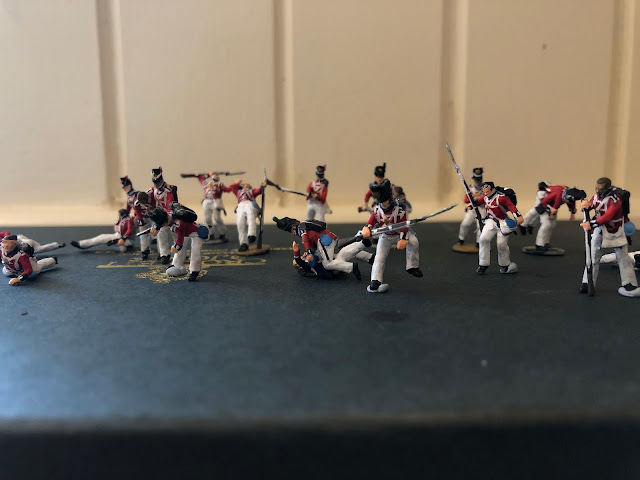 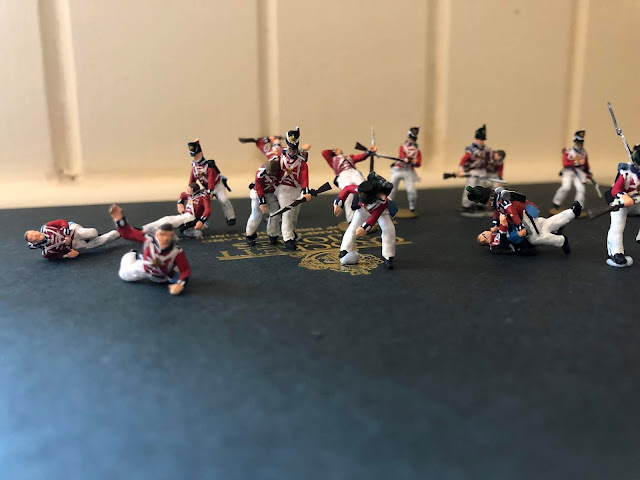 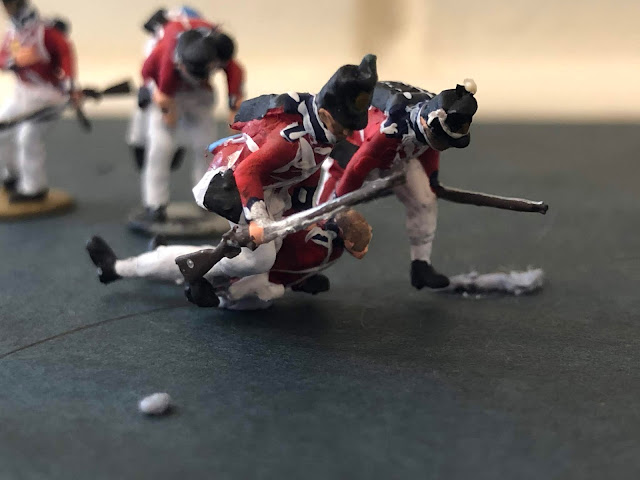 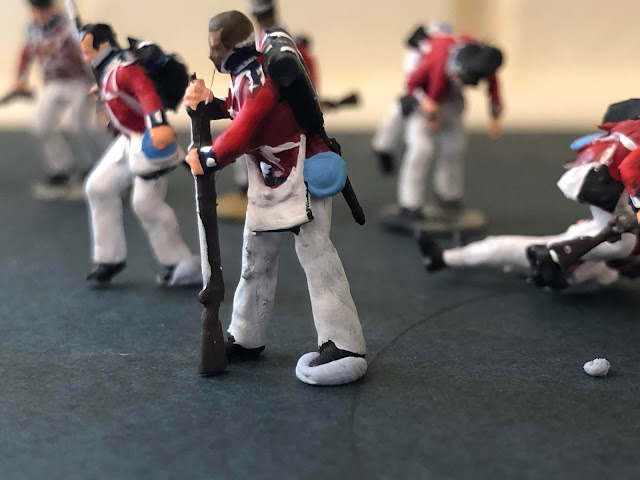 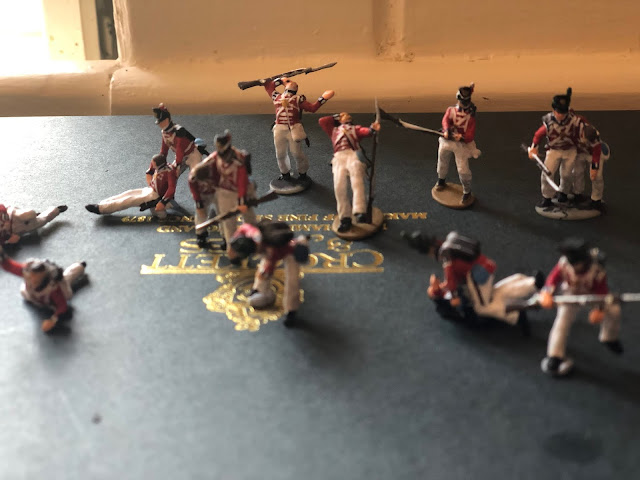 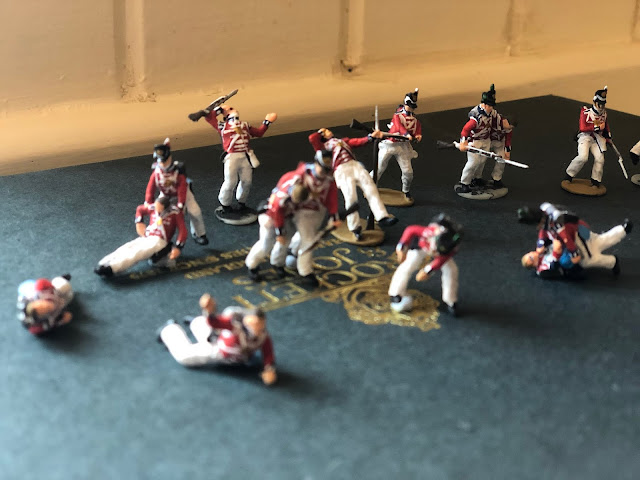